FERNG16
My brake light/horn fuse keeps blowing I unplugged the harness of the two bake brake lights plugged one in at a time and found out that the one on the drivers side keeps blowing the fuse if I unplug it the other 2 brake lights work. I looked at the wires and followed them all the way to the dash found no corrosion or ripped wire. I also unbolted and bolted back all the grounds but still keeps blowing the fuse if I leave the drivers side unplugged it wont blow but I wont have the drivers side rear brake, reverse, and blinker. So any ideas please msg me I have my car in just sitting with all the wires still showing. I also unplugged my radio and accesories fuse and it still blows its not the radio and if someone could leave me a diagram of the brake wires under the dash.
SPONSORED LINKS
Do you
have the same problem?
Yes
No

CARADIODOC
Sounds like you're headed in the wrong direction. You already identified the left rear wiring harness as the source of the problem, so why are you going into the dash area?

A simple trick to finding a short is to replace the blown fuse with a pair of spade terminals, then use small jumper wires to connect them to a 12 volt light bulb. A brake light bulb works well. When the circuit is live and the short is present, the bulb will be full brightness and hot so be sure it's not laying on the carpet or against a plastic door panel. Now you can unplug electrical connectors and move things around to see what makes the short go away. When it does, the bulb will get dim or go out.

Check if there's a trailer harness. Those commonly get chewed-up wires that can short together.
SPONSORED LINKS
Was this
answer
helpful?
Yes
No
+3

FERNG16
Put 2 spade terminals in each side of where the fuse goes in. Then use the small pair of jumper wires an put them on the spade terminals then connect the 12 volt bulb to the jumper cables. Then go to the back of the car and start messing with the back brake light harness to see if its a wire?
Was this
answer
helpful?
Yes
No

CARADIODOC
Yup. The bulb limits current to a safe level, about one amp, and it gives a nice visual indication of how much current is flowing. You should see that test bulb get bright when you have the harness plugged in and the circuit is turned on. That most likely means having a helper press the brake pedal or you can put a stick between the seat cushion and brake pedal to hold the pedal down. The bulb will get dim when you unplug that harness. Also, you'll see the working lights start to glow very dimly. They won't be full brightness because that test bulb is dropping some of the voltage.
Was this
answer
helpful?
Yes
No 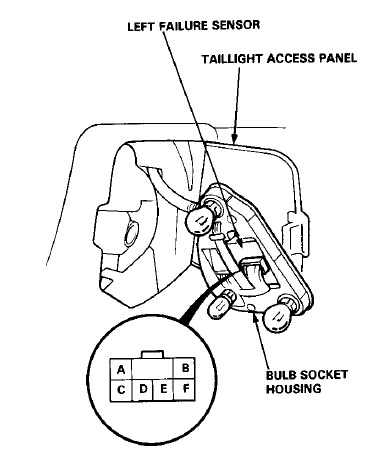 CARADIODOC
The lights are making a squealing noise? What sensor are you referring to?
SPONSORED LINKS
Was this
answer
helpful?
Yes
No

FERNG16
I just did it again to check and its coming from the sensor (Left failure sensor)
Was this
answer
helpful?
Yes
No

FERNG16
Do you think that the sensor could create the short
Was this
answer
helpful?
Yes
No

CARADIODOC
Unplug it and see if the short goes away. I never had one of those apart so I don't know what's in there or how they work.
Was this
answer
helpful?
Yes
No

CARADIODOC
Can't tell you that, but I can give you some generalizations. On many newer cars the rear turn signal and the brake light are totally different bulbs. That makes connecting trailer wiring very complicated for car owners but it simplifies the signal switch, which is all the manufacturers care about. With those, all three brake lights will be wired together and will have a single fuse for the entire circuit. On older cars like yours, and everything I drive, the same bulb is used for the brake light and the turn signal. The two left and right signal / brake lights need to be on separate circuits, and both of them are separate from the center brake light. Turn signals feed from the flasher which usually has its own fuse, and the center brake light will have IT'S own fuse, ... Usually.

Hi, Quick Question Really ( I Hope) I Have A 2 Warning Lights Aluminated On The Dash, Once The Brake Has Been Depressed For The First...
Asked by Lucyh ·
2 ANSWERS
1995
HONDA PRELUDE

Ok So I Have A Brake Light Issue. My Right Brake Light Goes On When I Press The Brakes But Is Not As Bright As The Right One. When I Turn...
Asked by fleaj5 ·
1 ANSWER
1994
HONDA PRELUDE

Was Driving Behind Husband's Car At Night. Noticed That The Tail Lights Were Pulsing At Regular Intervals. Pulsing For 10-15 Seconds...
Asked by ccwebb ·
1 ANSWER
1989
HONDA PRELUDE

Why Would My Car Stall At A Stop Light. Mainly With...