MOKITO86
Thank you for reading
Do I need to get tire aligment after replacing the passenger side cv shaft?
Hope to hear from you soon
Thank you
Do you
have the same problem?
Yes
No

CARADIODOC
Depends on what you disassembled. If you separated the lower ball joint from the spindle, then pried the lower control arm down, you will have put everything back together the way it was and the alignment didn't change. That's how I do it but that procedure is almost impossible on some Nissans. If you unbolted the bottom of the strut from the spindle, that is how "camber" is adjusted, and you will have changed it so then, yes, the car needs to be realigned. The original struts have two round holes for the lower mounting bolts so logic dictates you can't mess that up, but in fact, there is enough play in there to allow some movement. If the struts are not original, or if the lower hole has already been made oblong to allow for some adjustment, there is no chance camber will be the same as it was before.

Camber is the inward or outward tilt of the wheel as viewed from in front of the car.

There's three things to look at to know when an alignment is needed. The first two you can see right away. The steering wheel must be straight when the car is going down a straight road, and the car must not pull to either side when you let go of the steering wheel. The last one is tire wear patterns, but that takes time to show up. The alignment can still be off even if the first two things are good, but the tire wear will tell the story later.
SPONSORED LINKS
Was this
answer
helpful?
Yes
No

I Just Put New Tyrees On My Car. The Guys At The Service Center Said That There Was No Need For An Alingment. I Noticed That The Car Was Not...
Asked by ssosw ·
1 ANSWER
2006
NISSAN ALTIMA 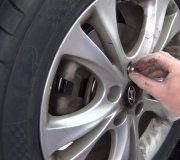 GUIDE
Wheel Removal and Tighten
There are typically two types of wheel covers which can hinder the removal of the lug nuts and wheel. The first is the complete hubcap which needs to be removed to gain...

Hi There, What Is The Required Air Pressure For Altima(97) Gxe, I Have Bought This Old One Few Days Back But Feels Like It Has Low Air...
Asked by manikc ·
2 ANSWERS
NISSAN ALTIMA

I Have A 2001 Nissan Altima And The Car Was Diagnosed As Having An Uneven Cross Caster Bar. The Car Pulls To The Right A Lot. I Was...
Asked by ms_mary00 ·
4 ANSWERS
2001
NISSAN ALTIMA