Power seat on drivers does not adjust

FLORIDA SHADETREE
The drivers side seat moves back and forth, it reclines well, but it does not raise up and down. You can hear the motor come on when the switch is pushed, but the seat will not raise and is in the lowest position. It is my wife's daily driver, so it is a big deal. Any insight would be greatly appreciated.
SPONSORED LINKS
Do you
have the same problem?
Yes
No

STEVE W.
If you can hear the motor but no seat motion it is either the plastic drive gear in the gearbox on the motor or the lever assembly on the seat frame, the most common failure is the gear. It is all part of the seat module assembly. To replace it you disable the airbag system by pulling the fuse for the SIR system. Then you disconnect and remove the front seat. Remove the seat cushion by freeing the retainers. Next you unbolt the seat frame from the power module. Reverse the process to install the new one.

You might want to look into a salvage yard part first. I have not replaced one on a DTS but one for a CTS was over $400.00 and that was a discounted price. I do not know of anyone other than used or dealer for the part.

FLORIDA SHADETREE
Perfect reply. I would have never thought to disable the air bag. I will tackle this next week. Thanks Steve.
Was this
answer
helpful?
Yes
No

STEVE W.
Let us know what happens. If you cannot get a realer part I would try online but verify the current part number from the dealer. GM loves to change part numbers if anything changes or they use a different supplier.
Was this
answer
helpful?
Yes
No

Ass Cushion Does Not Adjust, All Other Adjustments Work How To Repair
Asked by Bob Hillmer ·
1 ANSWER
2001
CADILLAC DTS 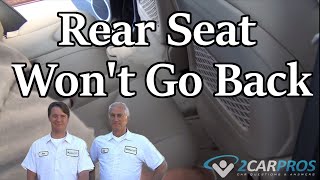 I'm Getting A "burning" Smell When I Turn On The Heated Seat On Either The Driver Or Passenger Side Of My 2006 Cadillac Dts. The Seats Have...
Asked by pjwlido ·
1 ANSWER
2006
CADILLAC DTS

Once In A While When I Hit A Bump In The Road The Overhead Console Has Sparks Comming Out Of It At The Garage Opener Area And The Passenger...
Asked by tmh995 ·
1 ANSWER
2007
CADILLAC DTS

The Rear Passenger Floor Becomes Soaked, I Dont Think It's Coolant I'm Thinking Condensation, But Don't Know Where It's Coming From Or...
Asked by bstretchb ·
3 ANSWERS
2006
CADILLAC DTS
VIEW MORE