DOUGJULS
Speedometer does not work right, gets stuck at different speeds and I have already changed the pickup on the transmission, what else can be wrong?
Do you
have the same problem?
Yes
No

MHPAUTOS
This happens when the cluster goes bad here is a video of the repair so you can fix it.

DOUGJULS
Also we have noticed that the fuel gage has been giving funny readings. It will be 3/4 full, then almost empty, then close to full. So I got a rebuilt cluster all fixed the video really helped.
Was this
answer
helpful?
Yes
No
+1

EXCOACH
I have been to 2 dealers and 1 mechanic and still the speedometer reads at 0. The '05 Suburban did qualify for a special GM policy and I had the instrument cluster replaced. Driving off the dealer lot the speedometer did not budge (so much for the road test!). My mechanic had narrowed down the problem to the likely suspect of the instrument cluster. The speed sensor is reading accurately out of the transmission. The computer seems to be getting the speed data as well. So could be a problem with the computer (BCM?) Or the wires to the instrument cluster. I have no idea where these are located. Any idea where a novice mechanic should start the next round of troubleshooting?
Was this
answer
helpful?
Yes
No

EXCOACH
The last visit at the dealership I had the instrument cluster replaced (at no cost under the GM special policy). That did not fix the problem. Am looking at maybe the BCM or wiring to/from the BCM. Not sure where those are located or if the dealer needs to test the BCM.
Was this
answer
helpful?
Yes
No

DOUGJULS
Sometimes it works ok, then it wil drop down to a lower speed even though the car is still moving faster, and sometimes it doesn't work at all
SPONSORED LINKS
Was this
answer
helpful?
Yes
No

My suggestion is your Vehicle Speed Sensor located on the right rear of the transmission is going bad. Item 36 in the pic 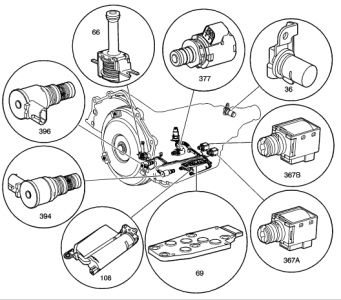 ROSS71
The other morning my speedometer, and cruise control stopped working.
The heater blower stopped too, but at the time I didn't think that was related because I've had problems with it before, now I'm not so sure.

I changed out the speed sensor after doing some internet searches, but that didn't seem to do anything.

The "Check engine" light comes on now every morning after driving it about a mile.

I checked the fuses under the dash (drivers side), but didn't see any bad ones.
Was this
answer
helpful?
Yes
No

MERLIN2021
Read the codes! Service engine soon is telling you where to start. Use a piece of wire and cross the two top right terminals, then turn the key to "ON" count the flashes to get the codes, then post the codes for us. A 22 will flash as 2 flashes then a short pause, then 2 flashes, if more than one code is stored, the pause will be longer. The codes will display three times and end with 12. Write them down and post here. This connector is right under the middle of the dash... 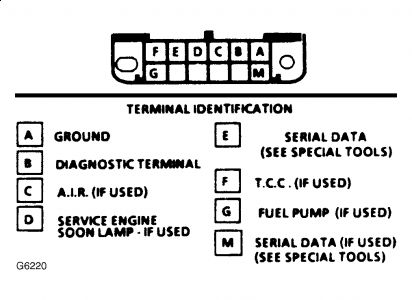 Ground A and B terminals together.
Was this
answer
helpful?
Yes
No

ROSS71
Thanks for the tip on checking the codes. The code is 24. My manual says that's the speed sensor (which I replaced). Is there a way to test the wiring or something?

Ross.
Was this
answer
helpful?
Yes
No

MERLIN2021
CODE 24: VEHICLE SPEED SENSOR (EXCEPT 3.1L) ECM applies and monitors a 12-volt signal on circuit No. 437 to Vehicle Speed Sensor (VSS). VSS alternately grounds and opens circuit No. 437 when wheels are turning. This pulsing action takes place about 2000 times per mile. The voltage level and pulses increase with vehicle speed. The ECM converts the pulsing voltage to MPH. The ECM uses VSS information in calculations to determine vehicle adjustments. A Code 24 sets when MPH is less than 2 MPH, transmission is not in Park or Neutral, engine speed is greater than 1400 RPM, circuit No. 437 voltage is constant and all of these conditions are met for 10 seconds. These conditions are met during a road load deceleration. The 2.8L may set this code while accelerating or at highway speeds. NOTE: Test numbers refer to test numbers on diagnostic chart. Test Number 1) Monitors ECM voltage on VSS circuit. With wheels turning, pulsing action will result in a varying voltage. Variation will be greater at low speeds to an average of 4-6 volts are about 20 MPH. Test Number 2) A voltage of less than one volt at ECM connector indicates circuit No. 437 wire is shorted to ground. Disconnect vehicle speed sensor connector. If voltage is now greater than 10 volts, vehicle speed sensor is faulty. If voltage remains less than 10 volts, circuit is grounded. If circuit is not grounded, check for faulty ECM connector or ECM. Before replacing the ECM, PROM should be checked for correct application. Test Number 3) A steady 8-12 volts at ECM connector indicates VSS circuit is open or speed sensor is faulty. Test Number 4) This is normal voltage which indicates a possible intermittent condition. Diagnostic Aids A faulty or misadjusted Park/Neutral switch may set a false Code 24. Use "Scan" tester and check for proper signal in Drive, while wiggling shifter. "Scan" tester MPH reading should closely match speedometer when vehicle is moving. 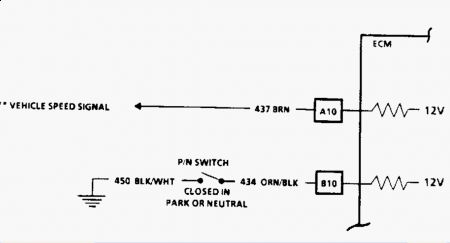 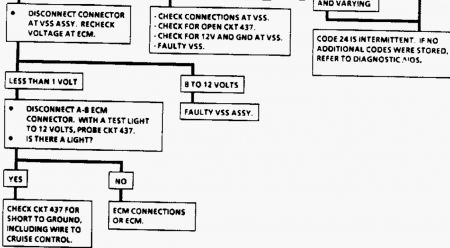 JUST_IN_TIME84
First start if the day speedometer and transmission overdrive work fine until I'm guessing it hits a certain temperature but the problem happens in the same area of my commute each time. The problem is the speedometer starts to go crazy and the transmission shifts out of overdrive and not always but most times the check engine light comes on. The transmission will not go back into overdrive nor will the speedometer work until it sits about 4 to 6 hours and then the same routine over again. Any ideas?
Was this
answer
helpful?
Yes
No

I would suspect the governor could be the issue.

It is located at the back of the transmission and is run by a output gear. That could be the shifting going into overdrive.

As far as the speedometer, did you replace the sensor on the tail shaft?

The vehicle speed sensor (VSS) sends a pulsating voltage signal to the ECM, which the ECM converts to MPH. This sensor mainly controls the operation of the transmission Torque Converter Clutch (TCC), shift light and cruise control (if equipped).

To reduce the effect of altitude on shift points, the effective area of the diaphragm is different than that of the bellows. Atmospheric pressure acts on the resulting differential area to reduce modulator pressure.

The vehicle speed signal to the transmission is supplied by the governor which is driven by the output shaft he governor consists of flyweights and a regulator valve. Centrifugal force of the flyweights is imposed on the regulator valve, causing it to regulate a pressure signal that increases with speed.

The Temperature Gauge Has Spun All The Way Around And Points Down. It Will Some Times Come Back To Around 160 Degrees When I Try Starting...
Asked by jbeaurain ·
3 ANSWERS
2004
CHEVROLET SUBURBAN

Several Of My Gauges (fuel, Oil And Tachometer) Are Not Working And Now My Electrical Mileage Range Is Off. Will This Cost A Lot To...
Asked by Cbloomenstein ·
9 ANSWERS
7 IMAGES
2003
CHEVROLET SUBURBAN