ASHLEAH
I need step by step instructions on how to replace the knock sensor in my 2004 supercharged nissan frontier.
Do you
have the same problem?
Yes
No

RIVERMIKERAT
Here are 2 images. There are 2 different engine codes for your vehicle. It looks like it's just mounted on the rear bulkhead.
Images (Click to enlarge)

SPONSORED LINKS
Was this
answer
helpful?
Yes
No
-2

RIVERMIKERAT
Already answered in your other thread.
Was this
answer
helpful?
Yes
No

IAMNIRSKI1
What causes the knock sensor on the truck listed above to light? The car seems to be running a little rougher. The timing belt has about 25,000 miles on it.
Was this
answer
helpful?
Yes
No

A knock sensor is an electrical component that can fail just like anything else after time. It is used to help aid in the engines timing to help optimize the engines performance. That is why your car is running roughly. Here is a tutorial that shows how it works:

I've attached a picture below of its location.Hope this helps and thanks for using 2CarPros.
Danny-
Image (Click to enlarge)

ELMBOY
My check engine light came on [yellow one], and I performed the code scanner and it says its the knock sensor. My shake seems to shake when warmed up at idle, just wondering if you had any ideas for what else could be causing the shaking. Thank you!
SPONSORED LINKS
Was this
answer
helpful?
Yes
No

The knock sensor is the primary sensor to adjust the ignition timing, if it is sending a false signal to the ECU, the ECU may be setting the incorrect timing causing the idle shaking problem, change the sensor and see how it goes after that. 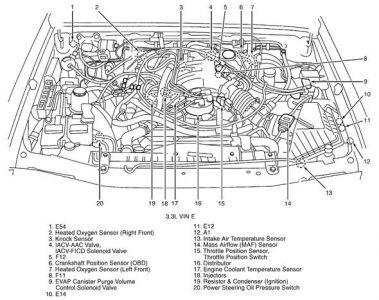 SARGCIAPARRA
1) After a head gasket replacement I still have an ongoing emissions code? Not sure the # but I do know I get charged a lot of $$ every time I ask for them to actually fix it. They have ruled out exhaust leak replace knock censor, gas cap, etc.

2) The worst part is the fact that with the heat (especially the defrost) on the vents blow in what smells like pure exhaust. My mechanic is really reluctant to look at it other than to tell me the engine compartment is sealed and it could not be that. Anything coming in could in the heater box. The real issue is that none of these issues were there before he "fixed" it. Strange enough, this happened exactly the same way 3 years ago when I had a head gasket done (don't ask I'm a fool who does not check coolant). When defrost is on the truck is almost insufferable?

Ever heard of such a a thing? I may try to reach out the mechanic of 3 years ago who fixed it the first time, but I'm guessing he won't remember.

WRENCHTECH
Your ventilation system brings in air from outside so whatever is happening out there will be brought into the passenger compartment.

It needs to be examined more closely. By the sounds of it, you just need to try a different shop because this one is unable to resolve anything.
Was this
answer
helpful?
Yes
No

ROB E
I need to replace the knock sensor on a 2000 nissan frontrier 6 cyl, I found the sensor for about $148 if you know how I could get it cheaper I would greatly appreciate it.

If you could give me an idea how much it will cost to replace the sensor, im not real mechanically inclined but I may be willing to replace it my self if you can provide me with any info to help me.

rob
Was this
answer
helpful?
Yes
No

BLACKOP555
Yes I would try a salvage yard to find the part or local junk y ard you can find them dirt cheap.
SPONSORED LINKS
Was this
answer
helpful?
Yes
No

TREMOR14
Junk yard is a great place to find parts, but I wouldn't reccomend replacement parts that deal with the engine componants that are questionable unless you know what to look for.

If you do get one from a Junk yard make sure to test it prior to installing it. Chiltons manual says that if you run a Ohm reader set at 1k, and test the positive to ground on the sensor should get a reading of 100k to 600k for a good one.

I recently picked up a knock sensor for a Nissan Frontier at Pep boys for $117.00, so they are a good place to go to get parts. Now if you want them to replace it be prepared to shell out $400.00 and wait for about 4 hours. They have to remove the intake manifold to get to the sensor.

Hope this helps ya.
(I'm looking at tackling this job myself at an auto hobby shop.)
Was this
answer
helpful?
Yes
No

ANDREWQUIROZ
Check engine light came on and I had autozone hook it up to thecomputer, and it said the knock sensor needed to be replaced.
Was this
answer
helpful?
Yes
No

RASMATAZ
The knock sensor retards the ignition timing when its senses engine detonation/pinging-like marbles being thrown in an empty tin can-
Was this
answer
helpful?
Yes
No

CARADIODOC
Fault codes never say to replace something. They are set in memory when the Engine Computer is not happy with the value a sensor is reporting or the circuit doesn't pass one of the continually on-going self tests. The codes are meant to direct you to the circuit or system that needs to be diagnosed, that's all. About 50 percent of the time the problem is indeed a defective sensor, but it's just as likely there is a corroded terminal in an electrical connector, a wire is rubbed through and grounding out, or it could even be nothing more than a sensor was unplugged while the ignition switch was turned on. Very often people just replace the sensor related to the code, then have the same problem. That adds to the running problem by introducing a new variable to the computer. No two sensors deliver exactly the same signals so the computer learns the characteristics of the new sensor by comparing it to other known conditions based on other sensor readings. When there's a code in memory, the computer may not learn the characteristics of the new sensor. Instead, it makes decisions based on the old sensor that it thinks is still on the engine.

The knock sensor is tuned to detect spark knock or preignition in a cylinder. When that is detected, the Engine Computer retards ignition timing to reduce that spark knock. Mechanical problems inside the engine can mimic that vibration and be falsely detected as spark knock. That can result in the ignition timing remaining retarded, which results in lower power and higher fuel consumption.

There are multiple codes that can be set related to the knock sensor. When the computer retards ignition timing, it knows the knocking should stop or decrease. If the vibration is still there due to something mechanically wrong in the engine, it may assume the knock sensor is reporting knocking when it knows there shouldn't be any, so it thinks that circuit or sensor has a problem. It COULD set the fault code when there's nothing wrong with the sensor.
Was this
answer
helpful?
Yes
No
+2

MISTIK20
Where is the Knock Sensor located on the 2000 Nissan Frontier 3.3liter V6?
Was this
answer
helpful?
Yes
No

MERLIN2021
It's on the top and to the rear of your engine, It's #3 in the picture. The knock sensor is NOT on top of anything except the block. It is under both the upper and lower intake manifolds. 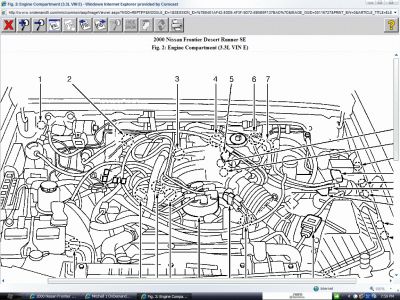 R1MORENO
How do I replace this sensor?
Was this
answer
helpful?
Yes
No

Where Is The Knock Sensor Located And What Steps Sould I Take To Replace It?
Asked by curtis1 ·
1 ANSWER
2001
NISSAN FRONTIER

Where I Can Buy The Harmonic Balances Online?

Where I Can Buy The Harmonic Balances Online?
Asked by jose medina ·
2 ANSWERS
2004
NISSAN FRONTIER

I Need To Replace Engine. I Have Found The Same Engine For Sale, The Only Difference Being: (1) My Engine To Be Replaced Is Coupled...
Asked by max_grammaticus ·
3 ANSWERS
1996
NISSAN FRONTIER

I Have To Stencil The Engine Number For Registration But I Can't Find Or Locate The Numbers.
Asked by marklg ·
1 ANSWER
2006
NISSAN FRONTIER

Upon Start Up Loud Ticking Or Knocking Noise From Pass Side, Lasts About 10 Seconds. Same Noise With A/c On Or Off And With Defroster On Or...
Asked by ironwilbur ·
6 ANSWERS
2005
NISSAN FRONTIER
VIEW MORE