Brake pedal drops all the way to the floor

CHIKNITZ
I own a 1999 Infiniti I30 and recently changed the brake pads and rear hub assembly. After bleeding the brakes the pedal was spongy and drops all the way to the floor. I was told to replace the master cylinder. After doing so and bleeding the sytem again, the pedal still goes down to the floor. What else could be wrong
SPONSORED LINKS
Do you
have the same problem?
Yes
No

It sounds like you need to open the ABS controller while bleeding. But to be sure lets make sure the caliper slides are not seized. Here is a guide to help us.

DJCL
Sounds like your air bound. Fill the master cylinder to the top with fluid leave the cap off. Open all the. After some start to flow well with no air close them and let the ones that have no flow stay open until there is flow. Then one by one close them all. Make shore the master stays full of fluid. Try this and get back to me.
Was this
answer
helpful?
Yes
No
-1

CHIKNITZ
We manually bled the breaks with a helper. Replaced front and rear brakes, all four disc. Djcl: we already did everything that you suggested and still get the same result. Does the proportioning valve have anything to do in aiding the situation? My husband has done many break jobs before but has never run into this problem.
Was this
answer
helpful?
Yes
No

DJCL
The proportioning valve will not do that unless its air bound. Are you getting fluid out of all 4 wheels an if not which ones have fluid
Was this
answer
helpful?
Yes
No
-1

CHIKNITZ
Fluid was coming out of all four wheels.
SPONSORED LINKS
Was this
answer
helpful?
Yes
No
-1

CHIKNITZ
Might I add, the brakes work fine while bleeding, but once you turn the car on they drop.
Was this
answer
helpful?
Yes
No

DJCL
Do you have abs on this car?
Was this
answer
helpful?
Yes
No
+2

CARADIODOC
Two things come to mind. First of all, on your car the parking brake is built into the rear disc brake calipers. Unlike front calipers that are self-adjusting, the rear ones do not adjust by simply stroking the brake pedal. You have to exercise the parking brake to run the pistons out of the rear calipers until the pads contact the rotors, otherwise you will always have a low pedal. If the parking brake cables are rusted tight, you can use a large pliers to work the levers on the back of the calipers. Each stroke will work the pistons out a little more. Fords had a real lot of trouble with that because it was common for their parking brake cables to rust tight within a year or two.

One clue to this problem is the red warning light will usually turn on because no pressure can build up in the rear calipers because the pistons aren't pushing against anything. The difference in pressure in the two hydraulic circuits is what turns that light on. Your car should have a split-diagonal hydraulic system where one front brake and the opposite rear one are on the same hydraulic circuit. Since each circuit has a rear caliper, there may be no pressure building in either circuit so the warning light may not turn on.

The second observation is you must never press the brake pedal more than half way to the floor. Crud and corrosion build up in the lower halves of the two bores where the pistons don't normally travel. When you push the pedal all the way down, as is often done when gravity-bleeding with a helper, you run the lip seals over that crud and rip them. That can result in a slowly sinking pedal or a very low pedal from one of the two hydraulic circuits not building pressure. The exception to this is if the master cylinder is new or less than about a year old. No corrosion will have formed yet in those.
Was this
answer
helpful?
Yes
No
+1

CHIKNITZ
Okay, the rear pistons are out and working. Pumping the hand brake didn't really help, the pedal is still low. Would it be possible for the proportioning valve to be clogged with crud due to bleeding the brakes with the old master cylinder on before we replaced it? Or if the valve is air-bound, would you bleed the breaks to get the air out or open the lines on it? Yes, it's ABS.
Was this
answer
helpful?
Yes
No

CARADIODOC
Anything that would block fluid flow, such as mud in the combination valve would cause a hard brake pedal. The proportioning valve, which is inside the combination valve, doesn't even enter the picture accept under hard braking. If you're getting fluid flow from the rear bleeder screws, air will be coming out too, and the lines are not blocked.

Many ABS hydraulic controllers require the use of a scanner to activate various valves to allow any air to be bled out. You still didn't say why you had to bleed the brakes. If the master cylinder was never allowed to run empty, there would be no air in the ABS controller. Even if you replaced calipers and bled them, no air should have entered the steel lines or the ABS system. Often when someone removes a caliper to replace it, brake fluid drips from the hose and runs the master cylinder empty. An easy way to avoid that is to place a stick from the seat to the brake pedal to hold the pedal down an inch or two. Gravity won't be strong enough to pull the brake fluid past the lip seals on the master cylinder's pistons.

If you suspect there might be air in the ABS hydraulic controller, you might consider driving in a safe area and trying to make the tires skid to activate the system. Air may be pushed out to the steel lines going to the wheels where it can be bled normally later. I never tried that myself, and little fluid volume flows out so that might not work. A brake specialist at the dealer should be able to tell you if a scanner is needed that can access the ABS computer to bleed that system. If it is, there's little chance of getting the air out without one.
Was this
answer
helpful?
Yes
No

CHIKNITZ
Your wisdom and advice are very much appreciated. Thank you. But it seems that our problem lies within the new master cylinder that is apparently bad. I guess we should have checked that first.
Was this
answer
helpful?
Yes
No

CARADIODOC
You might try loosening the mounting nuts one turn, then see how it acts. The push rod on some power boosters is adjustable, and while they shouldn't need to be readjusted, it's not something you want to overlook. If it's too long, the pistons in the master cylinder won't come back far enough to take another "bite" of brake fluid.

It's always possible a new part is defective, but master cylinders really aren't that complicated. I wouldn't suspect a new one is bad but I'll wait to hear back.
SPONSORED LINKS
Was this
answer
helpful?
Yes
No

2CARPROS-ARCHIVES
After I bleed my breakes the brakes wont work
Was this
answer
helpful?
Yes
No

ASEMASTER6371
What was the original issue?

Any Idea How To Remove Back Brake Rotors? Is A Puller Required & If So Any Special Technique To Re- Installing? Anything Unusaul About...
Asked by jjsos ·
1 ANSWER
1998
INFINITI I30 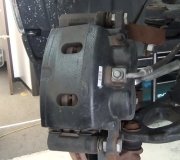 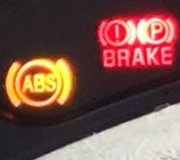