How to Replace a Fuel Injector 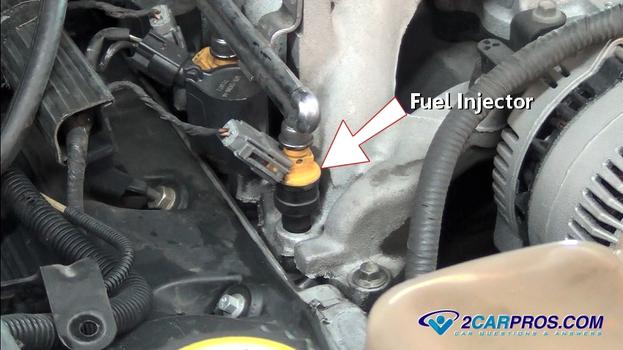 Part of the fuel injection system a fuel injector is reasonable for allowing fuel to enter the engine which is controlled by the car's computer. Various sensors provide feedback information to the computer which adjusts the pulse width of the injector pintle valve that provides a spray pattern to help atomize fuel in the combustion chamber.

Fuel injectors can fail in one of three ways. Being made of plastic and metal natural expansion of dissimilar materials can make the injector leak externally which can be detected while driving due to a fuel odor. The pintle valve of the injector is subject to volumes of fuel which can add varnishes to build on the exit point of the valve causing the spray pattern to diminish or stop altogether. Electronic windings are used to magnetically open the injector valve when signaled by the computer. Separated by a thin insulator these windings can touch together causing the injector to short circuit causing it not work, or force the injector to stay open flooding the engine or cylinder.

Fuel injector replacement costs can vary depending on the location and configuration of the fuel injection system ie: direct, throttle body or port injection. Generally fuel injectors cost between $45.00 and $90.00 (US) each, labor will vary.

Its best to allow the car sit for a couple of hours without turning the ignition key on. This will help depressurize the fuel system and minimize fuel leakage when working on the fuel injection system.

After the job is complete start the engine while using a flashlight to check for leaks to ensure the job was done correctly.

Begin by removing the electrical connector from the fuel injector, some connectors have a safety clip that needs to be released as well. 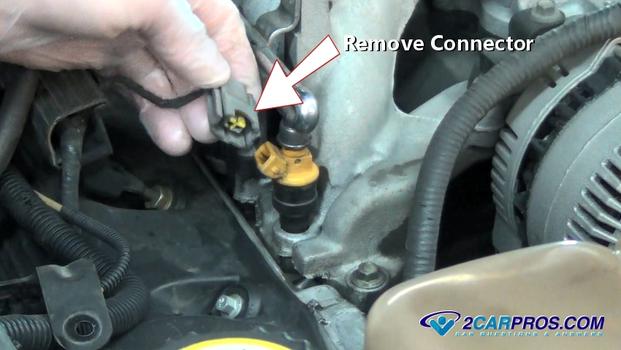 Remove the mounting bolts located on each corner of the fuel rail, these locations can vary. This will enable the fuel rail to be loosened and allow the fuel injector to be removed.

Proceed in gently lifting the fuel rail from the intake manifold, this will pop the rail loose. (Note: Sometimes it will be necessary to remove the fuel supply and return lines from the rail, its best to leave these connected to avoid fuel contamination when possible.) 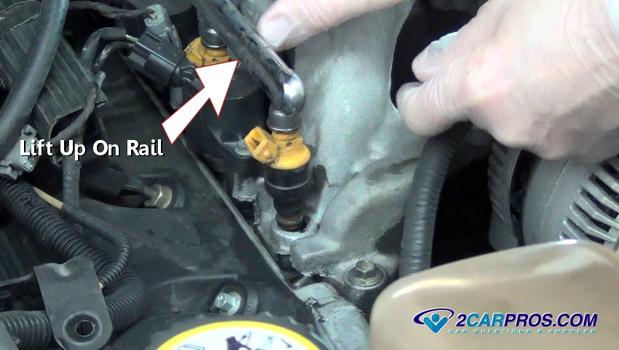 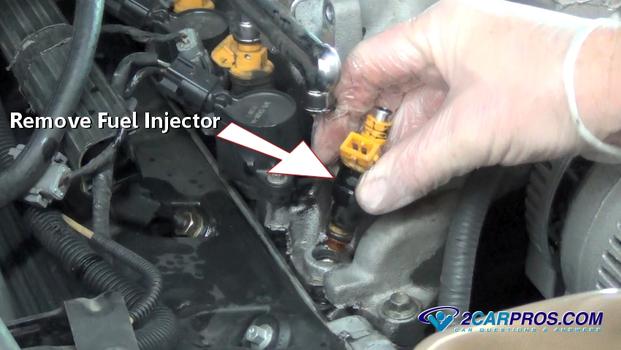 Inspect the old fuel injector and account for both sealing O rings as they can get stuck in the rail or down inside the intake manifold. 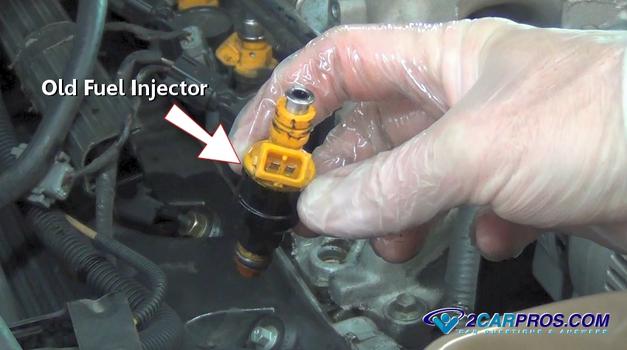 The pintel valve located at the end of the injector is where the fuel exits the injector and enters the engine, its common for these valves to plug and stop working (small holes.)

An injector O ring seal is used at either end of the injector and should be replaced when installing a new injector. 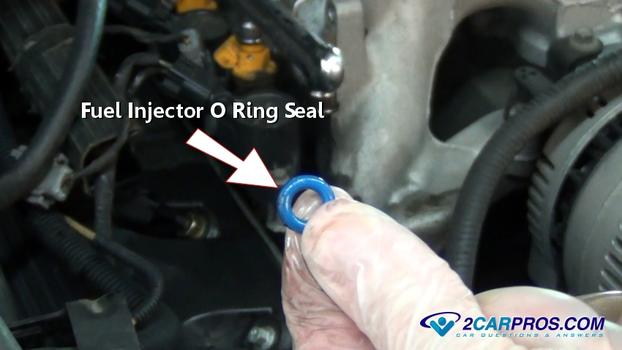 The old fuel injector should match the new unit, remove the dust caps from either end and ensure new O ring seals are installed. 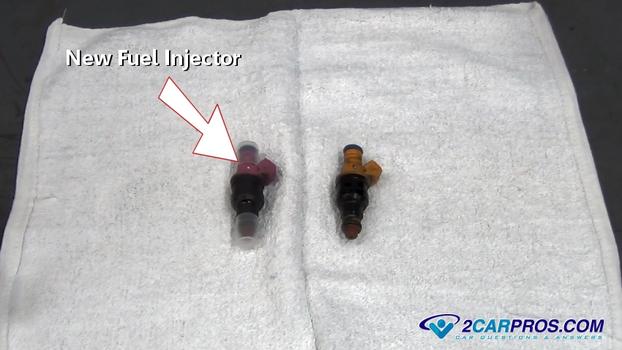 Gently install the new injector being mindful of the O ring seals. (Note: Use lubricant on O ring seals when installing injector.) 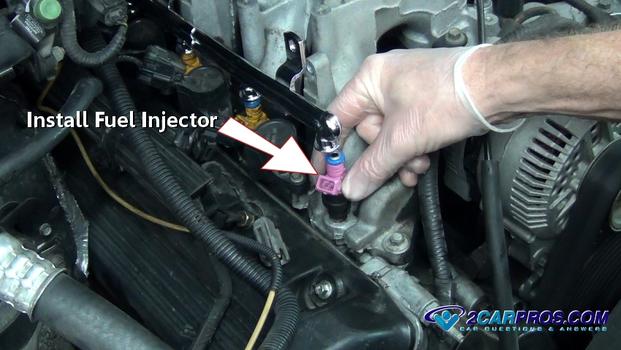 Gently push down on the rail while aligning the remaining injectors. 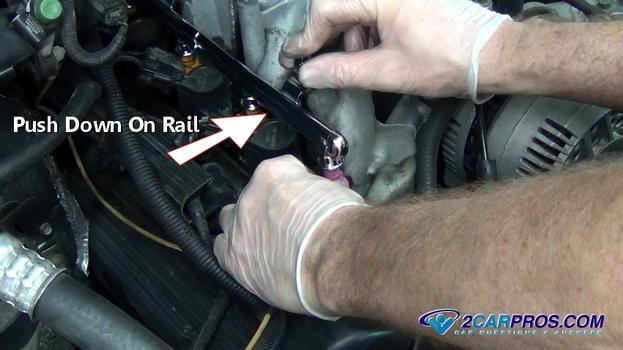 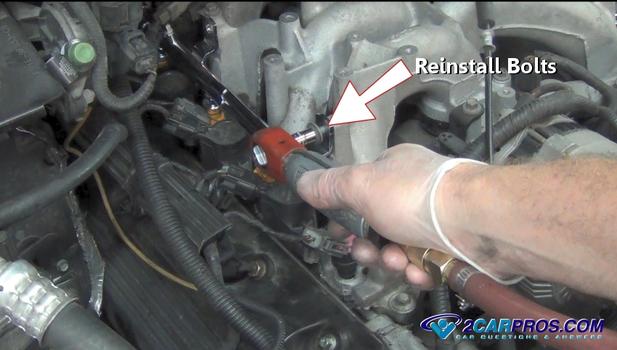 Reconnect the electrical connector to the fuel injector. Once the job is complete inspect the fuel rail for leaks after the engine has been started and ran. 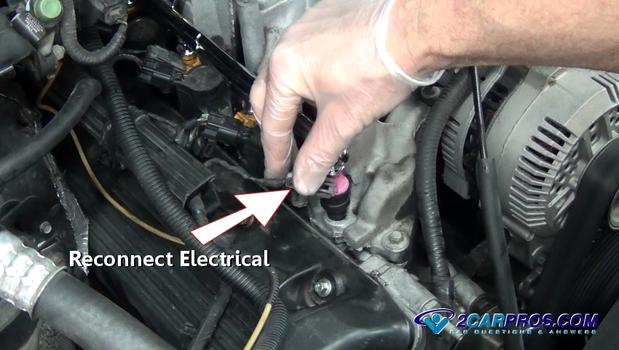 Our certified technicians are ready to answer fuel injector replacement questions for free. We hope you saved money and learned from this guide. We are creating a full set of car repair guides. Please subscribe to our 2CarPros YouTube channel and check back often for new videos which are uploaded regularly.