JLIANG08
Good Morning (07/27/2010 from Houston), I have 99 Toyota Camry CE 4-cylinder about 125000 miles. Check Engine light on, got it read at Autozone and AdvancedAuto with two P0401. I unplugged a fuse to turn it off, it ran fine in the morning. But CEL came back in afternoon when driving home. It leaks Oil a little since a few months ago so I added some oil, fill up with Plus gasoline & tight the cap, changed 4 new spark plugs and air filter. Unplug that fuse again to reset the CEL. It ran fine in morning, but CEL came back again in the afternoon. The car idles fine, runs smoothly, no other problem that I can tell, need state inspection in August. Should I go see Toyota dealer and maybe spent a lot to fix it? How about disconnect battery? Please advice! Truly appreciated!
SPONSORED LINKS
Do you
have the same problem?
Yes
No

DSPLC
P0401 relates to Exhaust Gas Recirculation (EGR). See the picture below. Check the EGR Valve (1)..Start the car, accelerate the gas by pulling the throttle cable. Underneath the EGR valve is a plunger, you should feel it going up and then down when you accelerate the gas. If it does not go up, there is something wrong with the EGR system. Turn off the engine. Pull the hose on the EGR valve. Push the plunger going up and cover with your finger the vacuum pipe. Plunger should not go down. When you remove your finger, plunger should go down. This means EGR valve is okay.
If plunger goes down with your finger on the vacuum pipe, EGR valve is defective.
Plunger should move freely when you push it up and release it. If it does not move freely, EGR valve needs cleaning or defective
2) Check hoses for cracks which causes vacuum leaks.
3) Check if vacuum pipe (3) located above intake manifold is clogged.
4)Most probable cause is the EGR modulator (labeled 2 in picture). I have the same 99 Camry. My EGR modulator was defective when P0401 code came out.

5) Lastly, maybe the solenoid valve underneath the intake manifold is defective or not getting power. 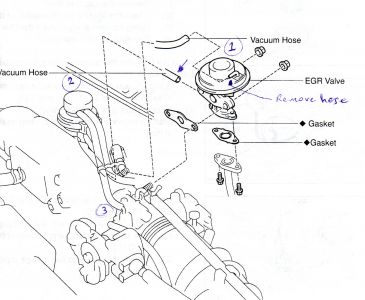 JLIANG08
Thank you so much, dsplc.
I looked a little around the EGR valve and modulator, hoses are ok, not sure where is the plunger?
Would you recommend me to go ahead replace the EGR modulator? Is it easy? Any tools or tricks? Thanks!
Was this
answer
helpful?
Yes
No 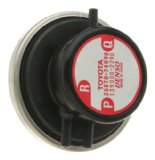 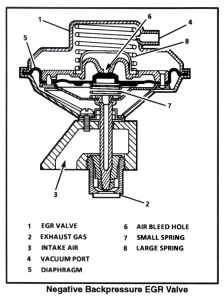 I am sorry, it is the diaphragm not plunger. Insert your finger on #7 and feel the diaphragm when you accelerate the gas by pulling the throttle cable. It should go up , then down.

I am reading some of the P0401, miine was the EGR modulator problem, the others are EGR valve problem, and others, vacuum solenoid valve problem.
Was this
answer
helpful?
Yes
No

JLIANG08
I would like to "Thank you so so much" to dsplc.
My 99 Camry's Check Engine Light problem solved and State Inspection passed. Mainly I believe is by replacing the EGR Modulator by my self with a neighbor's help.
But this is interesting, please read on:
I had changed 4 spark plugs, air filter, and gas cap, before changing the EGR Modulator ($54.99 from AutoZone). After changing the EGR Modulator, I again unplug that fuse to turn CEL off; but the CEL came back after 2 days, I was disappointed. While driving the car for several more days & planning to visit a mechanic shop with credit card ready to pay the big charge, that CEL light is Gone By Itself!
I immediately got the State Inspection done.
I was happy until that CEL came back 2 days later! Well, at least no hurry to fix it then. But the CEL again gone by itself 1 day later! And did NOT come back for more than a week now, I guess the system just need several days to decide which way to go.
Those simple parts that I replaced (and maybe Oil change & premium gas) could all helped a little, with the EGR Modulator the final cure.
Thanks to dsplc again!
Was this
answer
helpful?
Yes
No
+3

I Tried The Method Described In The Haynes Manual To Read The Trouble Codes. Found Trouble Code 22 And Corrected Problem With Sensor. I...
Asked by wildbill347 ·
10 ANSWERS
3 IMAGES
1990
TOYOTA CAMRY

The Check Engine Light Came On About 2 Weeks Ago. We Took It To The Mechanic Who Pulled The "bad Code" For A Catalytic Converter. We...
Asked by yankeestonk ·
5 ANSWERS
2001
TOYOTA CAMRY

I Just Got A Check Engine Light On My 1999 Toyota Camry V6 Sedan. My Obd2 Car-code Scanner Software Reports Fail On These Two Items: Under...
Asked by carinfo ·
5 ANSWERS
1999
TOYOTA CAMRY
VIEW MORE