MARIASCAR12
My fan not working. Car overheating. How can I fix it?
Do you
have the same problem?
Yes
No

There are usually only three reasons for the Cooling Fan not working...

1) The Radiator Fan Motor is bad... To test remove the Fan Relay using a test light ground the clip end to a good ground. Then probe each socket making sure to remember which ones light up. After that using a jumper wire plug one end into one of the hot sockets, the ones that lit up the test light, then plug the other end into one of the sockets that Did Not Light Up. If fan doesn't come on try next socket and so on till you have jumped all sockets that did not light the test light. If fan come on you know that the fan is obviously good and your problem lies with one of the following items.

2) The Coolant Temp Sensor... It is located at the rear of the engine about center way... If this is bad then usually your engine light is on.

3) The Radiator Fan Relay gone bad... It is located in the power box under the hood. Check out the link below for testing...

4) Fuse is blown due to shorted fan motor

.
SPONSORED LINKS
Was this
answer
helpful?
Yes
No
+1

REENEE1
My saturn is running hot after 10 miles of driving and the water completely empties from the overflow tank. I am unable to get to the radiator. I have changed the thermostat, water pump and there are no leaks, but somehow the water is always gone. The mechanic has checked all hoses and heads but still the car runs hot. Help please.
Was this
answer
helpful?
Yes
No
-1

SATURNTECH9
So does the car have a leak somewhere?Or does the car overheat and all the coolant boil's out threw the coolant cap. Does your radiator cooling fan come on with the a/c?Let me know the more detail's the better.
Was this
answer
helpful?
Yes
No
-1

THEGLOVE
I also have a 2000 Saturn SL2 with the Twin Cam 16 valve engine. It's had a problem with overheating. The cooling fan doesn't come unless the air condition is on. We checked the cooling temp sensor, the car only has one, and the temp gauge works fine so I assume the sensor is fine as well. The coolant also disappears somewhere. We've changed the water pump, thermostat, and checked all the hoses. Water does seem to be leaking from the rear of the engine. Can you please help?
Was this
answer
helpful?
Yes
No 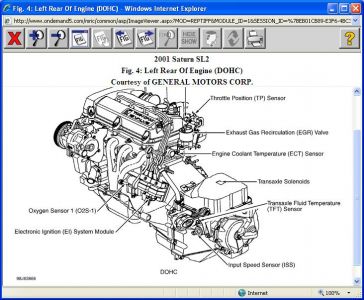 As far as your 2000 SL2 sounds like you need a new coolant temp sensor.When the coolant temp sensor goes bad it alway's read's too cold so when they go bad the temp gauge still work's it just never turn's the fan on when it should and the car over heat's.Replace the coolant temp make sure you get a brass tipped one the plastic tipped one's crack.You will loose coolant also inspect the connector to it if it's corroded you will have to replace that as well.They usually turn green or blue when they corrod.As far the coolant leak goes replace the coolant cap when they over heat they blow the cap.Also see if you can rent a coolant pressure tester so you can find the leak by your intake manifold.Also on that model it's pretty common for the intake manifold gasket to leak coolant around the number 4 cylinder close to where the egr valve is.So what's going on with your 1998 SL2 you never got back to me on the question's I asked you about it.
SPONSORED LINKS
Was this
answer
helpful?
Yes
No
+1

THEGLOVE
You said the intake manifold gasket is common to leak; would that cause bad compression? Because the car has been running real rough and cutting out. I checked compression in cylinder four and it was low.

The car also seems to be burning oil. Have to add a quart every now and again. Could all of this be the same problem?
Was this
answer
helpful?
Yes
No

KIMBOWIE
I've had my 2002 Saturn for about 7 years now and I'm the second owner (only 7,000 miles on it when I got it).
There was a problem with the AC clutch which I had replaced about two years ago, but then about a year ago the same problem occurred. Not having the $700 to get it fixed, I've been driving "as-is" with no problems. I'm not sure if that's related to what I'm about to tell you.
About 3 weeks ago, my "Low Coolant" light has been coming on every time I start my car. It eventually got to the point where I was putting antifreeze and/or water in every day. I took it in to a mechanic and they couldn't find a leak, so they put some stop leak in it and said to come back if the problem continued. It did. The light kept coming on and I had to keep filling it with water. A few days later I was on the highway and my car began to overheat, by the time I got off an exit and to a gas station it was red lining. I waited for it to cool down and then filled it back up with water. 3 miles down the highway and it overheated again. Bone dry. I filled it up again & dropped it off at the mechanic.
They said that the water would overheat & bubble out of the reservoir. They replaced the water pump and returned it. It was fine for a day, but then after starting the car, the coolant light came on, and when I stopped, antifreeze was dripping out.
Back to the mechanic, they replaced the thermostat and radiator and I got it back.
On the way to work today, it overheated again.
What else could the problem be?
Was this
answer
helpful?
Yes
No

SATURNTECH9
U ethier have a leak somewhere or ur car is overheating does ur fan come on at all ever I think u ethier have a bad cooling fan motor or bad coolant temp sensor thats what u need to have checked let me know what u find.
Louie
Was this
answer
helpful?
Yes
No
+1

SATURNTECH9
The intake leaking wouldn't cause low compression. Also burning oil is a different problem from low compression.
What was the compression reading on number 4cyl?How much oil does it burn in 2,000 mile's?
Was this
answer
helpful?
Yes
No
-1

AJVANDYKE
You could still very well have a leak and your radiator fan could be bad. (As mentioned in previous post) If you take your car back in to get your car checked again. Make sure that whatever shop you take it into uses a Coolant system pressure tester. Because small leaks are next to impossible to find without it. What that does is it presurizes your entire coolant system simulating the pressure it builds when the car heats up and checks to see if it maintains the recomended pressure. They can also check to see if your radiator cap and/or resivor cap as well. Giving you a more accurate diagnosis.
Was this
answer
helpful?
Yes
No

THEGLOVE
I forgot the exact number it's been a few months ago, we haven't driven the car since, I know it was about 5-10 under.

It would usually burn about a quart or two every 2,000 miles.
Was this
answer
helpful?
Yes
No

KIMBOWIE
Finally got it fixed (after a month in the shop)

Your right about the fan not coming on. One of the times I took it in, they suggested having the a/c on at all time to trigger the coolant fan to run, as well. That didn't work, though.

They took the engine apart and found that the problem was a warped head gasket.

Prior to this, the water pump, thermostat, and radiator have been replaced.

Thanks for your input!
SPONSORED LINKS
Was this
answer
helpful?
Yes
No
+2

SATURNTECH9
5-10psi differnce isn't that much your allowed up to 10 percent from highest to lowest. If you have atleast 175 psi in a cylinder that would be enough for that cylinder to run smooth.I would recheck all the compression's I'm the cylinder's and let me know what they are. It might not be compression causing the rough running. As far as the one quart in 2,000 mile's that is within spec for oil burning on that car. You could also add Lucas oil stablizer to the oil to slow the oil burning down.
Was this
answer
helpful?
Yes
No

SATURNTECH9
Glad to hear u got everything figured out no more overheating huh?Ur head gasket probably got warped from all that overheating not a common thing to happen on those cars. Also donations and feedback greatly appreachiated.
Louie
Was this
answer
helpful?
Yes
No
+1

I Have A 97 Saturn (4-dr) In Which The Cooling Fan Will Not Turn On And Can Not Figure Out What Is Causing The The Problem - I Replaced The...
Asked by faridmasud ·
101 ANSWERS
5 IMAGES
1997
SATURN SL2

I Have A 97 Saturn And I Have Trouble Getting It Started When Its Cold. Most Of The Time I Have To Hold The Gas To The Floor To Get It...
Asked by ffwoajob ·
1 ANSWER
1997
SATURN SL2

My Car Is Running Hot, So Far I Replaced The Thermostat Checked The Relays And All Fuses As Well As Flushing The Radiator. When The Car...
Asked by luckiecowgirl ·
1 ANSWER
1993
SATURN SL2

I Am Leaking Coolant Out From Under The Right Side Of The Car. It Seems To Drain Completely With In A Day Or So. Could It Be A Hose Is Loose...
Asked by Savagejill ·
1 ANSWER
1998
SATURN SL2

We Just Bought This Little Saturn, And After We Drove It 2 Times, We Noticed That It Dumped The Coolant In The Driveway, Then The Low...
Asked by moocow2963 ·
1 ANSWER
1998
SATURN SL2
VIEW MORE