JOE VENGLAR
Hello, I have a 93 plymouth grand voyager with a 3.3 auto front wheel drive. Last summer I replaced the radiator and the wiring harness to the fan has a 2 speed and a 1 speed plug on it. I plugged the 1 speed plug in and didn't notice the 2 speed plug until it got against the exhaust manifold. I think it shorted something out because my radiator fan and my a/c will not work. I replaced all of the relays and that did no good and checked all the fuses I could find. It's getting hot again and I would like to get this fixed. Is there a fusible link somewhere? Or what do you think the problem is?

Joe V
SPONSORED LINKS
Do you
have the same problem?
Yes
No

CARADIODOC
Can't remember which year they switched from fusible links to large maxi-fuses, but it was somewhere in the early 1990s. Look at the wire harness that goes around the left front strut tower. If you see a bunch of orange, white, and gray wires, those are fuse links. Pull on them one at a time. If it acts like a wire, it's ok. If it acts like a rubber band, it's junk. In some years, the backup lights run off the same fuse link as the radiator fan, so check to see if they're working.

Fuse links are regular wire but are a smaller gauge than the rest of the circuit, so they're the weak link in the chain. The insulation IS special because it will not burn or melt. You can buy fuse links at parts stores and the dealership. The color indicates the current rating. You will get twice as much wire as you need, so it's good for two repairs. You could install a fuse holder and use a regular blade-type fuse, but be sure to use a weather-proof fuse holder.

The Other Day My Car Overheated And I Noticed The Fan Wasn't Running. I Removed The Fan And Found That The Motor Has Something Inside (some...
Asked by dtaverne ·
1 ANSWER
1993
PLYMOUTH VOYAGER 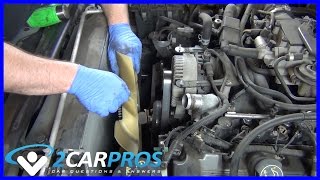 VIDEO
How to Remove a Fan Clutch
Instructional repair video 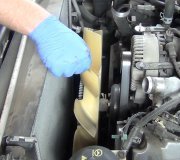 GUIDE
Fan Clutch Symptoms
A fan clutch is designed to cool the engine when it becomes too hot and on the verge of overheating. These clutches are featured on forward facing engine's only and are used...

This Is My First, So I Hope To Do This Right. The Radiator Fan Wont Turn On So I Got A Relay Switch In Hopes Of Solving The Problem But...
Asked by myvemma ·
1 ANSWER
1993
PLYMOUTH VOYAGER

I Am Having A Problem With The Cooling Fan. It Is Not Working And I Can't Seem To Find The Cooling Fan Switch 0n The Engine. Not Sure If...
Asked by kcdave42 ·
1 ANSWER
1993
PLYMOUTH VOYAGER

Radiator Fan Runs In High Mode All The Time

I Replaced The Relay Under The Hood But The Fan Still Stays On High. The Temp Sensor Is Hard To Get To Under The Coil Or I Would Replace It...
Asked by semockr ·
1 ANSWER
1995
PLYMOUTH VOYAGER

Bought This Van At 87k, Had A Head Gasket Done At A Dealership Right Away. Mostly Used For Hwy Driving Until Recently. Now It Is Used For...
Asked by muskies ·
1 ANSWER
1997
PLYMOUTH VOYAGER
VIEW MORE

How to Remove a Fan Clutch