It failed to pass the emissions test recently (the check engine light was on), and she was given a trouble code of P1506, Idle Air Control overspeed error.
She took the car to a Goodyear repair shop, they did their own diagnostic, got the same code, and said the "IAC motor" needed replacing. And- they quoted $800 for the part, and $125 labor.

Instead of having them do the repair, she asked me about it, I searched online for info, and then tried removing the solenoid part of the IAC valve to see if perhaps a cleaning would fix things. There were some deposits on the little plunger cone and spring, and I removed them and cleaned them up with carb cleaner. Replaced all, but no difference in performance- the engine idles erratically, sometimes up above a couple thousand RPM.
I tried unplugging the electrical connection to the IAC, but got no noticeable difference in idle speed. I removed the solenoid again, removed the little plunger and held it manually to the bypass air hole-- and the engine idled very well like that, sounded normal.

Next I tried touching jumper wires to the two electrical prongs of the solenoid while it was removed. When I made contact, the plunger immediately retracted. I hoped that by next reversing the polarity that the plunger would extend, but no- with reversed polarity it immediately retracted again. I assumed perhaps the suction created at the bypass air hole is what caused the plunger to extend fully when called for. (There is a small spring to help hold the plunger away from the hole, but there is no spring pushing the other way that would help hold it towards the hole, closing off the bypass air.)

I found the retail price of a new IAC valve to be around $400, and also found one at a salvage yard for $175. I just wasn't sure if the old IAC valve was bad, though, and asked my ex to call around for another repair shop. She found a Mazda-only repair shop, I'd like to name them here. These guys-- man, I still can't believe their incompetency. They did a diagnostic, and came up with all kinds of crazy stuff. The craziest was that they said the radiator was empty with both side tanks burst, so we'd need a new one for $400. Also things like "the transmission fluid smells burnt, and we're "probably" going to have to put in another transmission"- all kinds of crap like this. I said, what about the IAC? Is it bad, or can you say? They said to be sure, they'd need to do "another diagnostic". At that point I said we would just pay for the first diagnostic and come get the car. I went myself and drove it the few miles home, and then opened the radiator-- to find it under good pressure and full of antifreeze! No leaks!

They did say that they got two trouble codes- the P1506 we'd already heard about, and also P1504, "IAC circuit intermittent".

I'm hoping to at least get this car to pass the emissions test so that my ex-wife can get a tag on it and drive it- we just don't have the money to buy another at this time. From all I've related above, I'm hoping to ask, please, is there anything advice or direction you could give me concerning this problem?

Thank you so very much for your time, I appreciate you reading all this!
SPONSORED LINKS
Do you
have the same problem?
Yes
No

COSMO
Ok you will most likey NEED an IAC solenoid. They are either a stepper motor or duty cycle vale depending on the VIN split of the years. This sounds alot like commonly happens to both 626's and b2200's IAC motors. Sometimes a simple 'knocking' of the valve with a happer will help it idle better.

You might also want to check the air inlet tube for cracks and make sure that the hose clamps are all tightened properly. Pay close attention to the bolts holding the MAF sensor to the air box.

ALEXMBJ
Most excellent info, thanks so much for the details, I'll take your advice-

thanks!
Was this
answer
helpful?
Yes
No

Shakes When Stopped And In Drive. Check Engine Light...

After The Transmission Was Slipping Etc, A Rebuilt Trans Was Installed, But After It Was Banging Into Drive And Slipping And Vibrating, A...
Asked by waltersawicki ·
5 ANSWERS
2002
MAZDA 626

How And Where Can I Find The Engine Number?

I Have Searched High And Low For The Engine Number Of This V6 Mazda Engine, Which I Need To Know To Register The Car. Can Anybody Guide Me...
Asked by Veteran ·
6 ANSWERS
1994
MAZDA 626
VIEW MORE 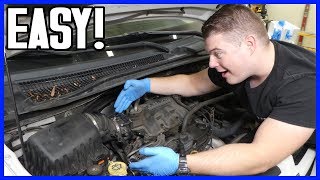