Loss of power (sluggish) and unexpextedly stalling whilst driving

PHOEBESUE
My car had been misfiring (rough idle and a bit underpowered) and also smelt badly of fuel when started. The engine light came on so I took it to the mechanic to have it repaired. They replaced the brake pads and rotors. They also replaced the timing belt (which they informed me was 12000kms overdue) so that they could diagnose the cause of the problems. They said something about cylinder 2 misfiring and replaced the coil pack. They had a bit of trouble getting the engine light off which I thought was strange. I needed my car back (as they'd already had it for longer than expected) so they said I was fine to come get it as everything was fixed, it was just the light. Half an hour later I got there and they said they fixed the engine light issue on their last test run.
When I drove it home I noticed the car felt extremely sluggish/heavy. It's usually a zippy little car so I just thought if it still feels like this in a few days I'd call them.
Then next day I started my car and it felt like a truck. It still felt sluggish and wasn't idling well. As I was driving along the car just shut off - every dash light came on, had no power steering and obviously no engine power at all - I rolled to the side of the road and turned the key off. I waited 10 seconds then started the car and cautiously kept driving. When I'd pull up at the lights the cars revs would go up and down repeatedly (down to almost no revs, then quickly up to 2/2000rpm). On my way home it stalled once whilst I was slowing down to a set of lights, and felt like it was on the verge of dying all the time.

So it's back at the mechanics and I was hoping someone could give me a little info on what might be going on as I feel like I'm being screwed here. When I took it back they said it looked like cylinder 1 was misfiring now. I've already spent $2100 in total with them over the past 3 weeks (had a major service before timing belt etc was done) and it's very frustrating.
SPONSORED LINKS
Do you
have the same problem?
Yes
No

MHPAUTOS
You may have a bad vacuum leak, the valve timing may be set wrong, they really need to check over all the things that they have done, and I would ask them why the timing belt was not done at the major service? If the car is worse after they have been working on it, they should not be charging you to rectify what they may have done incorrectly, unfortunately you have to rely on their honesty to do the correct thing and fix their problems at their expense.
SPONSORED LINKS
Was this
answer
helpful?
Yes
No

My Ford Fiesta Is In Trouble. Fallen Down The Speed And Not Getting Power As I Accelerate. And Black Smoke And Black Powder . Usually...
Asked by dennry0 ·
12 ANSWERS
2008
FORD FIESTA

Hi, We Recently Experienced A Drop In Engine Power Will Driving On Ascending Road (mountain Driving). Earlier, We Could Manage To...
Asked by sunilmack ·
1 ANSWER
2008
FORD FIESTA

When My Fiesta 1.25 Zetec Gets Tro Around 4500 Rpm It Seems To Struggle To Go Anywhere And Sounds Like It Is Really Strugling
Asked by mjboo ·
1 ANSWER
1998
FORD FIESTA

Hi I Recently Changed My Engine With A Ford Ka Sometimes I Change Gear It Seems To Lose Power When I Accelearte And Then It Kicks In With...
Asked by chilton2707 ·
3 ANSWERS
1 IMAGE
1997
FORD FIESTA

Juddering, Losing Power And The Engine Light Is On 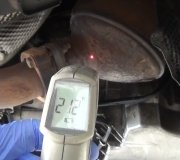