VORTECHTRAL
So I went onto forums and search the internet constantly, looking for suitable jacking points for a floor jack for my vehicle. On the forum other people have asked and they only repeat what the manual says, and that is the pinch welds. Pinch welds are not meant for a floor jack, they just are not. I took a few pictures and found some areas that I thought might be alright, however did not use them simply because I did not want to ruin my vehicle, so I simply went with pinch welds and a hockey puck with a groove cut in it to try and save the welds from not rolling. Hot tip it did not work out so well, however it did work none the less. I wanted to lift the car evenly on both sides then place stands under at same areas to distribute the weight evenly, however I ended up simply working on one area at a time, having only a jack and one stand side by side with the jack in the pinch weld with the arrow to it.

I just recently saw your video on YouTube on how to jack a car up, and saw a few areas that look very similar to what my vehicle has, and I would like to believe or simply call them the sub-frame. Black areas, looks like a "molded tube" however again I was scared to brake something so I did not. I also heard that its safe to use the rear differential as a safe jacking point, will this work with my vehicle as well? I simply want to raise in the center to have both tires off the ground, then place stands somewhere safe to distribute the load evenly to do my job faster and easier with less stress of "will this break?" I also noticed that it is safe to jack from the rear arm under the suspension, and I saw another video of a person doing just that so I will probably do that as well, then for the time being place the stand with a puck on the designated pinch weld area for lifting with a scissor lift.

If you are able to show some pictures of safe areas to lift from front and rear with floor jacks, and use jack stands on my vehicle listed above that would help immensely for later projects that get me under my vehicle. I do have a few pictures however they are rather large in size, however I can simply post the links here for you to see at your leisure.

https://imgur.com/lBwsDOI This one area naturally being the front is not very central however looks a a good strong point, I would drill a hole in the pick so the stand and or jack would have something to rest on rather then just a bolt.

https://imgur.com/bdzq8Zl This whole frame looks like what you were showing in your YouTube video and what I call the sub-frame that looks strong enough to hold the weight but did not want to chance it. That same "sub-frame" section goes around the very front under the valence making for a very easy yo reach and a very nice central area to lift the entire front however is also smaller so no chances were taken.

The rear I will just use the arms under the suspension for the time being as I saw it being used and you also confirmed it is a safe spot to lift from. Was not sure if lifting from there might mess with the alignment or not, but now I am confident it will be fine.

I know this is rather long and I am sorry, however I would like to get some solid answers since no one seems to want to release any actual information on how to jack this vehicle properly. The pinch welds will work yes, however with the height of the car, you cannot life the rear to place a stand in the front, floor jacks just do not lift high enough for that, so you are placed into a dilemma on what to do, and I went with the pinch weld and the stand beside the jack not in the marked designated spot for jacking.

Thanks,
Michael
SPONSORED LINKS
Do you
have the same problem?
Yes
No

DANNY L
Hello, I am Danny.

I have attached a link show information on jacking up a car. Hope this helps and please feel free to ask any other questions in needed. Thanks for using 2CarPros.
Danny-

https://www.2carpros.com/articles/jack-up-and-lift-your-car-safely
SPONSORED LINKS
Was this
answer
helpful?
Yes
No

VORTECHTRAL
I was hoping to get some information on my vehicle personally to be honest. The link was great however it was the same as your YouTube video that I watched a few days ago. Every vehicle is different and so jacking points also change. Looking under one car to an untrained eye (mine) you quickly start to question what is and what is not a safe location to jack from, and testing them could cause major problems.

I also understand that because every car is different, you may not be able to get any information to me any time soon at all since they are not everywhere, and you may never get your hands on that model. I was just hoping for some new information, that I could then show to others also wondering the same question.
Was this
answer
helpful?
Yes
No

DANNY L
Hello again.
Yes, I understand. I suppose the next time I am over at my mothers house I could verify by looking under her car (Lincoln MKX). It is the same platform/model as the Ford Edge. I will get back to you soon. Hope this helps and thanks again for using 2CarPros.
Danny-
Was this
answer
helpful?
Yes
No

KEN
I found this for you. Check out the diagrams (below). Please let us know if you need anything else to get the problem fixed.

VORTECHTRAL
Those are the pinch welds that I used and only did one side of the car at a time. Would love to know if there is a more central location for front and for rear to jack from to then place the stands on either the pinch welds or on a better spot. Those pinch welds on the Edge seem to be extra soft, and bent pretty easy, they are not rusty at all does not really make sense. I used pucks with grooves cut into them after I saw the bend, but in other videos someone has their jack stand only on a pinch weld and no bending. Perhaps I have bad luck.
SPONSORED LINKS
Was this
answer
helpful?
Yes
No

KEN
Nope, the pinch welds bend they will not tell you anything else as far as that goes. Look for a security place to raise the front or rear. Here is the video again:

Cheers, Ken
Was this
answer
helpful?
Yes
No
-1 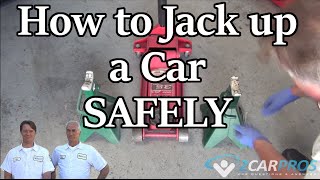 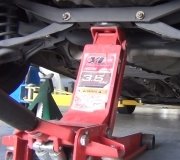 GUIDE
Jack Up Your Car
When saving money by working on your car yourself you will need to do it safely by raising your vehicle off of the ground using a floor jack. Every person who has a vehicle ...