3DDYKING
I have the car listed above and I would like to put some rims on it 24 inches to be exact. But I am not sure how to do that because it has a torsion bar and I’m not an expert on the modifications where I have a picture on what I would like it to look like. I need some ideas on how to get it lifted and how to fit the rims. Please someone anyone.
Image (Click to enlarge)

Here are the directions for adjusting height on the front. Once this is done, the rear will most likely sit low, so you will need to change the leaf spring shackle for rear height adjustment or install air shocks.

Please understand, I'm not sure how much you need to raise it. The torsion bars are a concern to me.

I attached pictures below. The first two correlate with the torsion bar adjustment. The last two show a break down of the rear suspension.

NOTE: Before taking measurements, grasp the bumpers at the center (rear bumper first) and jounce the car up and down several times. Jounce the car at the front bumper the same number of times and release the bumper at the same point in the cycle each time.

1. Ride height is measured from the head of the front suspension front crossmember insulator bolt to ground.
2. If necessary, turn torsion bar adjusting bolt clockwise to increase height and counterclockwise to decrease height.
3. After completing adjustment, jounce vehicle and recheck riding height. Both sides must be measured even though only one side may have been adjusted. Front vehicle height should not vary more than 1/4 inch from the specified riding height. Riding height should also be within 1/4 inch side to side.

Raising the vehicle will adversely change the way it handles. Also, it will change the geometry of the steering components; thus an alignment is recommended.

Torsion bars are pretty simple to operate. They work by twisting a metal bar and as you twist it, it will lift the front end. So if you want to lift it you need to tighten the torsion nut.

If you are not familiar with this then I would not experiment with it because not only can you effect your suspension but you could get hurt as this bar is under pretty high amount of stress.

As for fitting these large of wheels, you will most likely need to lift the vehicle and cut out the wheel wells. It is not as simple as just lifting it and bolting on the wheels.

As for the detail about what needs to be done on this specific vehicle, that is hard to say because this is called custom work. Having never put this large of wheels on this vehicle we would need to figure it out as we went. Basically put the wheels in and see what is in the way, then figure out a solution.

Best option is to find someone who has done it on this vehicle and ask them what they did. If you found a picture of this then I would try to find the owner and see if they will share what they did.

Sorry I don't have more detail for you but unfortunately this is something that would require trial and error.
Was this
answer
helpful?
Yes
No

CARADIODOC
This was my dream car for many years. The car in the photo says, "look how ugly I can make myself!"

The car in the photo is not lifted. All that was done is ridiculous-looking wheels where installed that are larger in diameter, and tires with shorter sidewalls were installed on them. The outer circumference of the tires hasn't changed that much. This is going to result in the ride quality of Fred Flintstone's car. Why you'd want it to ride like you're sitting on a rock, I'm not sure.

To answer your question about torsion bars, those were used by Chrysler since 1960 and have the advantage over coil springs of being easily adjustable, but that adjustment is meant only to return the front suspension ride height to specs as all springs sag with age. Alignment specialists, like myself, get pretty excited about correct ride height. This is even more critical with the "long-arm, short-arm, (SLA) suspension system you have. If you look at your upper control arms, you'll see they are shorter than the lower control arms, and they angle down quite a bit. The lower control arms are longer, and should be nearly parallel to the ground. Those two lengths and angles, along with the frame and spindle, set up the designed-in geometric shape the suspension system must maintain for best tire wear. Even though the numbers look perfect on the alignment computer, we know if that geometry is wrong, you will have horrible tire wear and miserable handling. This is caused by the control arms going through the wrong arcs as the car bounces up and down on bumpy roads. The length and angles of the control arms cause the wheel to tip in and out a little on top as the car body goes up and down. This perfect suspension geometry is only achieved when ride height is set to specs.

When the suspension ride height is set at anything other than stock, the up and down movement of the body will cause the wheel and tire to move left and right. That causes the tire to slide, or skid sideways over the road surface. That is what leads to the accelerated wear. When the two tires have unequal traction, which is 99 percent of the time, the car will follow one tire, usually the right one since roads lean to the right so more weight is on that tire. Each time the left tire hits a small bump, the car will momentarily follow that one. You'll be constantly correcting the steering, which makes for a very tiring car to drive.

If ride quality, comfort, handling, and tire wear don't concern you, I wouldn't be doing you any favor by neglecting to address the potential liability issues. Manufacturers spend thousands of hours in research and development designing their cars to be as safe as possible. There is nothing you or I can do to improve on that. Anything we modify adversely affects handling, steering response, and braking distance. When the other guy runs a red light and causes a crash, you can be sure his lawyer or insurance investigator is going to be all over your car looking for modifications that contributed to that crash so he can shift some of the blame from his client to you. They will convince a jury that you were partly at fault for that crash because you were less-able to avoid it, and they may be right. No manufacturer, car dealer, or mechanic wants to become party to that lawsuit, so the people at most repair shops will refuse to work on your car. As an alignment technician at a very nice family-owned Chrysler dealership, I had the owners' blessings to refuse to bring in any car I thought could leave our shop less safe than when it was designed. As a lowly mechanic, I had the final say in what was safe for our customers.

These Fifth Aves were so horrendously comfortable and fun to drive. Much of that comfort comes from using that SLA suspension system. It's not used much any more because it is very heavy and expensive, but road shock has to change direction multiple times as it passes through the parts, before what little is left is transferred up into the body where we feel it. Lightweight cars today use other suspension systems that have poor ride quality, but they get better fuel mileage. To get some comfort back, control arm bushings and other parts are made from softer rubber compounds that no longer last the life of the car. With fewer parts, each one has to absorb a higher percentage of that road shock, so they wear out faster.

Please reconsider what you're trying to do to your car. If you really want to dress it up and drive the girls wild, look for a set of original wire wheel covers and center caps. They were standard on most of these cars so they shouldn't be hard to find. They were of much higher quality than the aftermarket ones I've used in the past, so they won't rust or corrode, even in Wisconsin where they throw a pound of salt on an ounce of snow.
Was this
answer
helpful?
Yes
No
+1 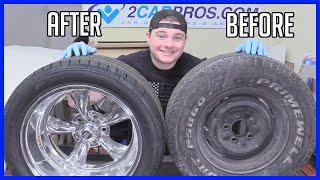