ERIKA WALTERS
I need to know if the computer, relays and power window motors will work off a 2005 Chrysler Sebring 2.7 liter 4 door will work for my 2004 coupe?
Do you
have the same problem?
Yes
No

CARADIODOC
There's about two dozen computers, and some will likely be the same. Chrysler used two styles of relay. One is a 1" cube and one is considerably skinnier. Those were used for very many years.

The original reason I became a big fan of the Chrysler company is the fantastic parts interchangeability between years and models. That does still extend to current models, but not to such an extent as in the '60s and '70s. To figure out if parts are the same between two known models, look them up on the web site for an auto parts supplier. I use the Rock Auto site every day for reference. If you find the same part number for both applications, they're the same. The problem is if the numbers are different, you don't know why. For your window motors, for example, only the plug might be different. You might be able to pull the terminals out of the connector body and slide them into the one you need, but that means the new motors will have totally different part numbers.

That works well when only two or three models are involved, or you have a donor car for used parts. When you're discussing hundreds of potential donor cars in a salvage yard, ask them to look up your model in their "Hollander Guide". That is a huge, very expensive book that will list every part on your car with a code number. You look that number up in the back of the book, and it will list every year and model that used that part. Now you can run through the yard and look just for those models.
SPONSORED LINKS
Was this
answer
helpful?
Yes
No

STEVE W.
Much of those two are very different. The Coupe is actually a restyled Mitsubishi Eclipse while the 4 door and convertible are a Chrysler designed platform. Fuses, relays, light bulbs and other small items will interchange but most of the other parts are vehicle specific. They just share the name.
Was this
answer
helpful?
Yes
No

Window Will Go Down But Wont Go Back Up

Have A 2004 Chrysler Sebring That I Have Replaced The Motor On The Passenger Side Front Because The Window Will Go Down But Wouldn't Go Back...
Asked by iceeyes ·
1 ANSWER
2004
CHRYSLER SEBRING 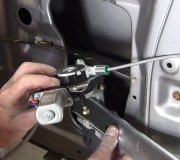 GUIDE
Window Motor and Regulator Replacement
Easy step by step guide on how to replace an automotive window motor and regulator, though the configuration may vary slightly the process is the same, this information ...

2000 Chrysler Sebring I Have A Sebring Convertible. The Rear Driver's Side Window Will Not Go Down At All. The Front Passenger Side...
Asked by CaitlinLavin ·
1 ANSWER
2000
CHRYSLER SEBRING

How Do You Adjust The Drivers Door Window, I Get Alot Of Air And Leakage
Asked by wsw51 ·
3 ANSWERS
1999
CHRYSLER SEBRING

2005 Sebring Convertable. Windows Do Not Go Up. Fuses Are Good Blower/fan Went Out At The Same Time
Asked by bbelskey ·
2 ANSWERS
2005
CHRYSLER SEBRING

I Have A Hard Top Convertible. When You Open The Driver Side Door The Window Is Suppose To Drop A Few Inches Automatically And When It Is...
Asked by CECtech1 ·
5 ANSWERS
1 IMAGE
2008
CHRYSLER SEBRING
VIEW MORE