BGBAMA
I have a 1998 Odyssey purchased new. The car has been absolutely stellar. The only actual "repair" was a thermostat replacement at 83,000. The car now has 133,000 miles.

Last fall (2008), at 122,000 miles, I detected a slight stumble - like the engine was misfiring for a split second. It happened rarely, and only at 40-43 mph under very light acceleration. I checked the plugs and found black residue, instead of the normal light gray/brown. The plugs were new with only 12,000 miles on them.

I replaced them, but the problem remained - the same occasional hesitation, within a very narrow speed range, only under the slightest acceleration, and black plugs. I checked around on the internet and found many articles describing the symptoms. Most of them said the problem was most likely in the EGR system.

I took the car to the local Honda dealer. The mechanic drove the car and verifed the problem. They diagnosed the problem as a dirty or faulty EGR valve/system. The repair estimate was over $400 for an EGR "kit", consisting of a new valve and cleaning the system. That seemed like an awful lot of money, since I already knew that replacement valves were $130-150. Even if Honda charged $250 for the valve, that left about two hours labor. I asked what exactly they cleaned and got a vague "all the lines and tubes".

All my research points to a problem with the EGR system, notably carbon buildup and clogging in many makes and model cars. I found numerous Honda articles, advice columns, service bulletins, extended warranties, etc. I have step-by-step pictures of cleaning procedures for some 4 cyl Accords and V6 engines, including the "pipe kit" replacement for the 1999 Odyssey V6. But I can't find anything for the 1998 Odyssey 4-cyl engine. My intake manifold seems to have but one EGR vacuum port, and no other "lines and tubes".

Following common advice for other engines, I removed and cleaned the EGR valve with carburetor cleaner. I blocked off the exhaust side port to the valve, started the engine, and sprayed carburetor/throttle body cleaner into the vacuum side EGR port and throttle body. It didn't help.

Then I installed a new EGR valve, but the symptoms remain and are getting worse. Now the stumble can happen 38-45 mph, and it's harsher. Last fall, the hesitation would randomly appear, then disappear in a fraction of a second or with any change in throttle position - up or down. Now it occurs routinely and can last a second or two.

I've read the EGR system description and troubleshooting in the service manual. I don't know if the Honda mechanic did any PCM diagnostics. The service rep did not mention any P0401 or P1491 error codes, and the "check engine" light (which does work) has never come on.

1. What precisely is the problem? What am I missing? What exactly needs to be done?

2. The factory service manual says the EGR valve is controlled by the PCM (computer), which gathers data from from he many sensors. Is it possible that one of the sensors needs replacing? Maybe just an O2, TP, or MAP sensor?

Although I'm not a mechanic, I do my own maintenance, brakes, valve adjustments, plug changes, etc. The car has never been "tuned up" per se. I still get the same mileage as the day I bought it: 29/30 mpg in city and mixed driving, dropping to about 27-28 on Interstate trips, cruising at 75 mph. I'm convinced there's one specific thing that's causing the problem, and a $400 shotgun "kit" solution really isn't necessary.
SPONSORED LINKS
Do you
have the same problem?
Yes
No

I want to know more about the black residue on spark plug. Can you remember witch spark plug had black residue on it. Black residue is most likely bad or leaking injector. Because it is so small that the computer can't sett the code.
You know your car better, so you know when there is something wrong.
Have the injectors taking care off and let me know how the car runs
SPONSORED LINKS
Was this
answer
helpful?
Yes
No

All four plugs are equally dark. Gas mileage is unchanged since I bought the car 11 years ago (29/30 city and mixed, 27-28 on the interstate at 75mph). I'd be really unhappy if I replaced four injectors and it didn't fix the problem (like I did with the EGR valve). So that's got me wondering:

- What would cause all four injectors to go bad simultaneously?

- Would bad injectors cause the hesitation/stumbling in such a limited speed range and only under light acceleration? Otherwise, the car runs flawlessly.

I just want to double-check first. The Honda dealership mechanic said it was the EGR system, but they wouldn't tell me exactly what they would do for $400 other than replace the EGR valve. Other online responses include a bad distributor and carbon buildup inside the intake manifold.

If you still feel the fundamental problem is bad injector(s) on my make, model, & year, I will certainly consider laying out the money for them.

Many thanx for your feedback!
Was this
answer
helpful?
Yes
No

MATHIASO
Not all the injectors get bad same time, I thought it was just one spark plug that was black, thinking of the injector on that cylinder.so do not change your injectors 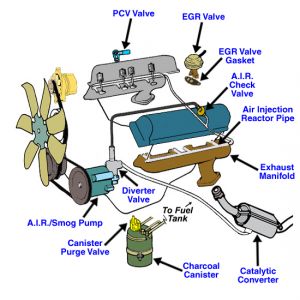 have you cleaned the egr passages to the intake?
there could be hard carbon deposit there.
when your car is running, remove the pcv valve and put your finger on it, you should feel strong suction.
if not, let me know.
Was this
answer
helpful?
Yes
No

BGBAMA
Have you cleaned the egr passages to the intake?
I don't really know. I stuck a stiff wire up the EGR intake port and poked as best I could. But I can't find a diagram of the manifold internals, and I can't see inside, so I don't really know if they're clear or not. Removing the manifold is beyond my tools, time, and ability. So that would be a very expensive last resort. I'd wanna make [u:94c18fd522][i:94c18fd522]damn[/i:94c18fd522][/u:94c18fd522] sure that's the source of the hesitation before even considering it.

there could be hard carbon deposit there.
Yes. That's why I tried to clean the passages with spray cleaner, which I know may or may not work. (See original posting.)

when your car is running, remove the pcv valve and put your finger on it, you should feel strong suction.
Yep. Suckin' strong.

Here is the engine compartment: 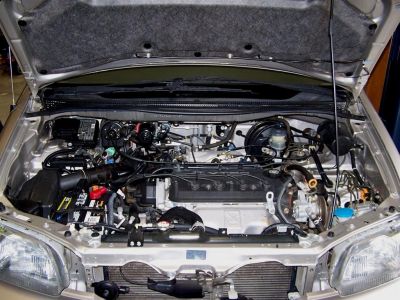 This is with the EGR removed. The round exhaust port is on the left. The rectangular port on the right is the intake. It has a small horizontal hole inside (also on the right). That is where I used the wire and throttle body cleaner: 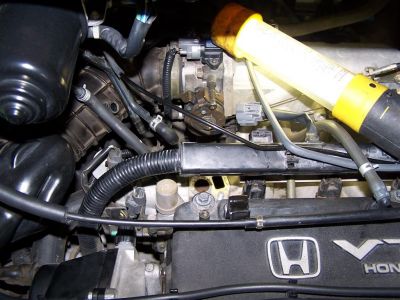 Here, the old EGR is removed: 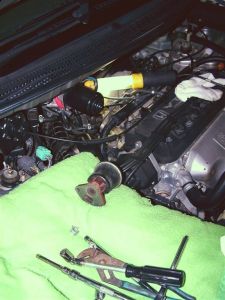 Thanx again. I'm trying to diagnose and pinpoint the problem logically.
Was this
answer
helpful?
Yes
No 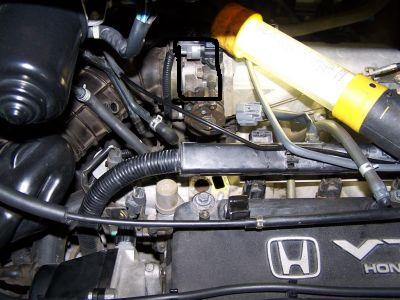 here is another view of the intake
I'm sending the same picture in your email , so you can see it more bigger. 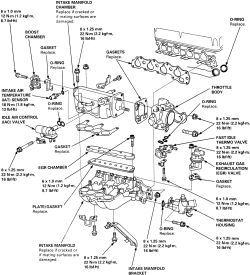 BGBAMA
First, thanks to eeverybody who offered good leads and suggestions. I sincerely appreciate it.

As it turns out, the "stumbling and hesitation" was in fact the torque converter lockup - quickly engaging & disengaging.

I changed the transmission fluid, and the problem disappeared. Amazed the hell outa me.

Again, thank you all.
Was this
answer
helpful?
Yes
No

MATHIASO
Thank you, your persistance has pay off.
You did everything by yourself.
We all have learned something.
Thanks
Was this
answer
helpful?
Yes
No
+1

My Van Has Been Regularly Serviced As Per The Maintenance Schedule. End Of Feb. Engine Light On. Egr Valve Replaced By Dealership. Last...
Asked by msams ·
1 ANSWER
2000
HONDA ODYSSEY

My Check Engine Light Came On So I Had It Checked. Come Back Improper Fuel Flow, So I Had The Egr Valve Replaced Was Good For @ 35 Miles...
Asked by rachelpatel ·
3 ANSWERS
1999
HONDA ODYSSEY

There Was A Recall On The Egr Valve For This Vehicle. Is It Just A Matter Of Cleaning The Valve. Also My Vehicle Failed The Md Emmissions...
Asked by sdiesenberg ·
1 ANSWER
2000
HONDA ODYSSEY

My Check Engine Light Came On And Need To Smog It. The Egr Valve Was The Code And I Replaced It And Still The Light. I Have Removed The...
Asked by iminsandiego ·
1 ANSWER
2001
HONDA ODYSSEY
VIEW MORE