ALZACK41
1) How to determine if the fuel pressure regulator and the fuel pump are faulty or not?

2) What should be the normal fuel pressure?

3) Should be the gas tank taken off in case fuel pump needs replacement?
SPONSORED LINKS
Do you
have the same problem?
Yes
No

STEVE W.
You can test the fuel pressure and the regulator using a simple pressure test gauge that you T into the line using a short adapter at the fuel filter. See the picture below.
Normal fuel pressure should be 44-50 psi, with the pump activated and engine not running.
Low pressure or no pressure is usually the pump. Higher pressure is usually the regulator.
A plugged filter can also cause poor fuel flow but still show good pressure so I would also test the flow once you test the pressure. Just direct the line into a fuel safe container and make sure it is pumping a good amount. Toyota doesn't show a specification but I generally like to see at least a quart of fuel in five to seven seconds from a good pump/filter.
Also, watch the pressure when you turn off the pump. Toyota says the system should hold at least 25 psi for five minutes. If it does not the check valve is failing. This usually shows up as hard starting with a warm engine.

No need to remove the tank, under the rear seat there is an access panel for the pump. The pressure regulator is also mounted on the pump but can be replaced as a separate part.
Image (Click to enlarge) 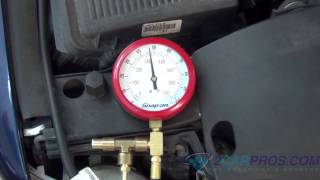 Can Someone Tell Me How To Get The Top Hose Off The Fuel Filter. It Has A Plastic Clasp And I Don't Want To Beak It.
Asked by gdoss ·
1 ANSWER
2000
TOYOTA AVALON

When I Am Filling My Gas Tank I Can Only Pump A Few Dollars Before The Pump Cuts Off. I Have To Slowly Pump About 15cents At A Time Or It...
Asked by yve ·
1 ANSWER
1999
TOYOTA AVALON