Check engine light is on?

MIKE98
When I start the truck and let it idle its fine but when I go to drive it looses power and dies but when the check engine light is on is ok. What could be causing that?
SPONSORED LINKS
Do you
have the same problem?
Yes
No

JACOBANDNICKOLAS
Have you had the computer scanned for trouble codes? Most parts stores will do it for free. Have that done and let me know what you find. If there is nothing there, I will direct you on checking fuel pump pressure. This guide will help get the codes

MPARKER71
When I hit 25 mph on my truck with an E4OD Transmission that has been replaced in the last 1000 miles with a tested rebuilt unit, the check engine light comes on. Had someone test drive the vehicle and they stated that it felt like the lock-up torque convertor was kicking in and out on them trying to kill the engine. I have yet to feel this sensation. Got the truck cheap because it needed a transmission, wondering if the TCM could be bad, and took out the last transmission. That and where would the TCM be located, on 1993 I know they are by the passenger outer kick panel, but there is not one there on this year. Thank You.
Was this
answer
helpful?
Yes
No

MERLIN2021
Do this and count the flashes...Count the flashes, a 22 will flash as 2 flashes then a short pause, then 2 flashes, if more than one code is stored, the pause will be longer. The codes will display three times and end with 11 or 111. Write them down and post here. First do this with the key on engine off, then again with it running. 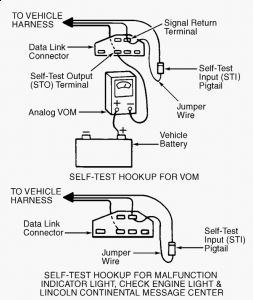 MPARKER71
That was the first thing I tried. Once the key is shut off after driving over 25MPH. Lights goes out and there are no codes. Used a code scanner for the first try and the pigtail voltmeter combo for the second try.
Was this
answer
helpful?
Yes
No

MERLIN2021
If the problem started after the tranny install, take it back and let them test drive it. Check connector on the tranny for bent or pushed out pins and a good connection. I show the electronic shift control module behind the right kickpanel. Also check the wiring harness on the right side near exhaust manifold, some are too close and wreak havoc on the wires, inspect inside the conduit!
SPONSORED LINKS
Was this
answer
helpful?
Yes
No

MPARKER71
I installed the transmission. Checked everything I could inside the transmission without dissasembly to make sure it was rebuilt correctly, did not notice an issue. Checked both connectors on the transmission, no bent pins, corrosion, or wire damage. I found a TCM at a local salvage yard for the 1993 5.8L E4OD 4x4 located on the passenger side kouter kick panel, this truck does not have the module located in the same spot, nice flat sheet metal. Transmission wiring on this truck runs down the driver side frame rail, across the transmission cross member and back to the transmission body. The original ford plastic clips are currently in place and support the wiring fully. Could not locate any road damage or heat damage on the wiring. A new symptom that I noticed is, if you press the over drive switch, no light comes on, checked light to makes sure bulb was ok, and when you come to a stop the torque convertor stays locked up and kills the engine. It will continue to kill the engine until you press the button again, and then goes back to normal operation. This truck is just being weird.
Was this
answer
helpful?
Yes
No

MERLIN2021
TCC solenoid is probably at fault, and is part of a rebuild, take it back to the rebuilder and have a new one put in. Also remove the tranny pan, if the filter fell off, the truck can stall comming to a stop, just like a bad TCC! Make sure the filter seals up tight on the intake tube it attaches to.
Was this
answer
helpful?
Yes
No

MPARKER71
Sweet, thanks for your help. Dropped the pan, filter was in tight, replaced the solenoid pack, seems to be operating normally.
Was this
answer
helpful?
Yes
No

MERLIN2021
Good work!
Was this
answer
helpful?
Yes
No

EIS MAN
We have an F-150 that when we drive it a warning beeper sounds and the engine light comes on and every other possible waring goes off, sounds like its about to self destruct, but noting seems wrong at all we have been driving it for 2 years like this and it runs like a dog on fire. Any possible causes plus the beeper calls back every 30 mins, pretty annoying. We have tried code readers but every reader thats been plugged into it freezes when a koer test is ran. Otherwise its not giving any codes. Any ideas?
Was this
answer
helpful?
Yes
No

JACOBANDNICKOLAS
Have you had the body control module checked?
Was this
answer
helpful?
Yes
No

EIS MAN
No we haven't because the truck runs and drives fine but we'll have that looked at then. What is the body control module for?
SPONSORED LINKS
Was this
answer
helpful?
Yes
No

JACOBANDNICKOLAS
Here is a good definition that I got for you about the BCM.

" A body control module is a computer component in an automobile that checks, regulates and operates electronic devices throughout the car. When electric devices first began being used in cars and trucks, each device was governed by a separate electric component. There was a module for the air-conditioning, a module for the interior lighting, a module for the door locks, and so forth. A body control module gathers all these separate modules under one system so that they function together instead of separately, a format easier to both manufacture and troubleshoot.

While there are many different types of body control modules, they are generally alike, connecting sensors, switches and automatic reactions together in one computer system. These components are divided into inputs, such as sensor data about heat or speed, and outputs, or ways in which the body control module computer responds to control the vehicle's electronic functions. Inputs and outputs are further divided into analog and digital types of information--analog signals being used with modules that may change continuously (such as oil pressure) and digital signals being used for modules that can simply be on or off (like the headlights or the oil indication light).
Inputs and Outputs

Input components are divided into electric parts, such as the potentiometer, the variable resistor, the magnetic pickup and the voltage generator. A potentiometer is designed to change a voltage output to the computer, so that when a fuel setting or gas-pedal position is changed, the voltage will change and the computer will read the new voltage and respond accordingly. The variable resistor works in a similar fashion, but senses changes in temperature for reading engine coolant conditions and other data. The magnetic pickup reads the speed of a rotating object via a simple magnet attached to the object, and a voltage generator sends out a voltage signal based on the presence of compounds like oxygen so the computer can tell the oxygen-rich levels of a pipe or space.

Output devices consist of relays, solenoids, servomotors, switching transistors and others. Relays can turn other devices on and off by connecting or disrupting a circuit to turn on a fan or automatic air conditioning unit. Solenoids are analog components that use magnetic forces to move objects, such as fuel injectors. A servometer is a mini-motor also used to move objects, usually to turn things, while a switching transistor is the digital version of a relay. Other output devices can be very simple, such as LED lights, or very complex, such as a night-vision view of the road.
Computer Tasks

The body control module computer performs many of the functions of a normal computer, including storing data, using RAM and sending or receiving radio waves. The computer regulates many of the systems and troubleshoots all its component modules. Some modules are set by timer, which the computer digitally keeps track of, while other modules--like the anti-theft alarm--need to be active even when the car is turned off. The body control module computer also can be in charge of keeping track of mileage and CO2 output.

If the BCM is causing the problem, the symptioms you described can occurr. Let me know what you find. Also. Sorry it's so long, but it does explaine it.

EIS MAN
Thanks for the helpful info I don't mind the lengthy reading. For now I am just going to take the module apart and disable the beeper.
Was this
answer
helpful?
Yes
No

JACOBANDNICKOLAS
Let me know if you have other questions.

SIDRICK
MY 1994 FORD F-150 STARTS TO BOG DOWN AFTER YOU RUN IT ABOUT 8-10 MILES. IT HAS NO POWER UNLESS I STOMP IT TO THE FLOOR AND THEN IT WILL KIND DRIVE RIGHT A LITTLE WAYS AND START AGAIN. DURING THIS TIME WHEN IT GETS BAD THE CHECK ENGINE LIGHT COMES ON AND OFF. PLEASE HELP I REALLY NEED MY TRUCK RUNNING WE ARE DOWN TO ONE VEHICLE THANK. YOU
Was this
answer
helpful?
Yes
No

2CEXPT
Have the computer scanned for code/s-you have a problem within the engine management system that caused the CEL to turn on-This is your starting point of diagnosis, finding out what's going on
Was this
answer
helpful?
Yes
No

SIDRICK
I'M A STUDENT DEISEL MECHANIC IN TRAINING AND THEY HAVEA CODE READER.I'LL USE IT AND LET YOU KNOW IF IT WORKED THANKS.
Was this
answer
helpful?
Yes
No

SIDRICK
I put an odb1 scannaer on it and it came up o2 sensor and timing.I put on the sensor and the light went off, but it still bogs down when I drive it. When its parked it revs up fine. The guys I took it to tried to adjust the timing but I dont think they have it right. Help please
Was this
answer
helpful?
Yes
No

2CEXPT
When was the last tune-up/ double check the ignition timing, fuel pressure and transmission
Was this
answer
helpful?
Yes
No

Several Times My Check Engine Light Has Come On. It Will Go Off Without Service, But For Some Reason I Seem To Get Better Fuel Mileage Out...
Asked by forestguy ·
62 ANSWERS
1 IMAGE
1997
FORD F-150

Suddenly My Check Engine Came On Flashing But Sometimes It Is Constant. There Is Also A Knocking Noise And Loss Of Power. What Could The...
Asked by bartranger ·
52 ANSWERS
1998
FORD F-150

I Was Driving Into Work This Morning And I Experienced A Loss Of Power (about 50%). I Looked At The Dash Guages And The Check Engine Light...
Asked by wadepedersen ·
40 ANSWERS
2003
FORD F-150

I Was Driving My Truck The Other Day And The Truck Was Sluggish And Acted Like It Was Missing When The Truck Got Up To About 15mph (2nd Gear...
Asked by NOLAford ·
24 ANSWERS
1999
FORD F-150
VIEW MORE 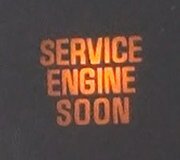