In last 500 miles or less, new after market fuel pump by gas station mechanic as well as new distributor on the same Ã¢ï¿½ï¿½no start repair ticketÃ¢ï¿½ï¿½. Came back with no top end power on freeway-- but happy to be able to get places. Now it intermittently wont start, or stalls while driving, or momentary loss of power for fraction of a second. Auto electrician had van for 4 days with no symptoms. So I barely made home and it alternates between all's perfect to only a couple random ignites but wont fully ignite enough to bother releasing the key from starter position. It stalls or seemingly skips a ignition spark or fuel starvation momentarily enough ( every other time I drive it) that I'm afraid to drive it. (But to buy another used van will take 2 weeks to transfer inventory inside vanÃ¢ï¿½ï¿½so Id like to fix this one, but tired of throwing money at it and getting inferior products.)
One day, the correlation of stalling in response to by hitting the electronic cruise control unit that has the cable to throttle body on it, was convincing enough after six or more attempts, getting a stall on second to forth beat each time, that I unplug and taped that electrical connector,
yesterday I replaced the Ignition control module(after market) fender mountÃ¢ï¿½ï¿½but it skipped a few beats on residential street test drive.
I have ordered a fuel pressure gauge without relief valve so I can drive around with that installed.
Almost two years ago it would not start, but hours later started right up and drove flawleesly for 1 Ã‚ ½ years. Although flawless includes ( I've become numb to an almost unperceptable) persistent mini miss upon sweeping turn and steep hill climb that's been present fore 5 years ever since I have owned the van.
KOEO as follows 111, 10,112,117,122,327,638

KOER codes 412
I can look up those codes, but I'm at a loss for what that means and next steps, especially with so many codes. Would having the van engine cover off inside the van keep gauges too cool-not up to operating temperature? This the first time Ive gathered codes.
I could be wrong, but it seems to die shortly after making sweeping intersection turns and accelerating-but how does that connect to no starts after driven fine and parked at my destination problem-free.

I've jumpered by-passed the inertia switch during stationary testing, and am 98% sure it was jumpered when experienced a major no start episode that we walked away from till next day and then it started fine. I have not driven with inertia bypassed- it seems unsafe when Im loosing engine and therefore power steering and power brakes.
Mild San Diego climate. I'd appreciate any help, thoughts, suggestions.
SPONSORED LINKS
Do you
have the same problem?
Yes
No

Problem seems to be voltage below expected and possible causes are :

1. Circuit grounded in wiring harness
2. Faulty Sensor ( not likely to be so many sensors being faulty at the same time.)
3. Faulty PCM.
4. Faulty connection. 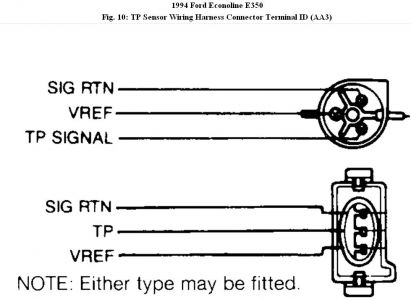 STALLINGMONSTER
I haven't had time to follow up with your suggestions, I thought I had it fixed by bending spades of pcm relay sinse when I touched it I could get engine to stall. Putting just a single spade and a wire as a handle and insertting revealed loose, non-gripping female slots.
But then more stalling a few days later, so rebent conacts. Is fuse-relay box a replacable item, or is it built into the wiring harnes-which looks like a chore. The last episode, the van upon starting and false starts, starting coughing and spewing blackish exhasut running rich. Yanked the pcm rrelay, re-bent and inserted and van ran fine. This most likely will be a long trouble shoot-its been 3 yrs now of intermitant with done of the local mechanics able to help. They replace things and when it happens to run they quicly give it back to me with a bill, but no real fix. I think Im on the right track. Your suggestions and time will tell. Thanks for your patience.
Was this
answer
helpful?
Yes
No

KHLOW2008
Yes, I believe you are on the right track.

The fuse box is a replaceable component but if there are no sings of burning due to overheating etc, there is no necessity to replace it.

For female termiinal that are not holding tightly, bending the male contact is not going to work. Use a sharp and stiff wire to pry the female terminal to make them tighter and retest.
Was this
answer
helpful?
Yes
No

STALLINGMONSTER
Ive used a push-pin the try to pry the female tighter, but that didnt work too well and an a single spade insert would lift right with zero resintance. Thats why I resorted to bending and even splitting lenghtwise and and overlapping/shearing like scissors so that double thickness. But even that didnot resolve todays resent stall/ and subsequent no start.
Spark at spark plug, as well as smell gas. Have inertia switch jumper in desperation to get it to start.
Presently towed to auto electric shop. But last time he had it it worked fine for him. I'll still keep working on it outside his shop tonight maybe, or after he gives it back to me. Im loosing faith in the vehicle.
Could the loose pcm relay damage the pcm itself, by all the intermitant connections?
Was this
answer
helpful?
Yes
No

KHLOW2008
The relay should not have caused any damage to the PCM. Maybe it is the relay internals that is intermittently failing and when you worked on it, the movement had judderred the poor joints into working and after some time it failed.
SPONSORED LINKS
Was this
answer
helpful?
Yes
No

STALLINGMONSTER
In requards to relays ive been alternating between 6 relays for the 2 posiitions(pcm & fuel) in question. Always having a differnt bend configuration ready to try.
2) just got van back from auto electrician, and he found a solid closure" idle air control" gasket with two 5% of normal size air passage holes created with a nail or something.
Van appeared to run fine, but what do I expect next? What was somebody trying to compensate for. Ive owned van for 5 yrs. I believe the relays where an issue preventing the van from starting for weeks on end and intermitant. The gasket would explain hot restart failures and stalls when decelarating for a stop-But that has not been a problem for the 5 yrs. Was the gaslet a smog check modification to get a pass and yet I could drive it for five years. I'm about one more stall away from buying another used van, unless I have hope of what to check next igven the above history. Thank you.
Was this
answer
helpful?
Yes
No

KHLOW2008
The modified gasket could be done to lower the idling speed which could be be out of specs due to some components malfunctioning.

You are correct about this not being the cause of non starting. What you can expect if the gasket is replaced with standard is an increase in idling speed and more stable idling with electrical loads.

Faulty PCM can cause intermittent non starting as indicated by the ASD rely not working. Sometimes PCM fails intermittently due to racked solders in some of the printed circuit soldered joints and would work flawlessely until it decised not to work. Waiting time can make it work again.
Was this
answer
helpful?
Yes
No

STALLINGMONSTER
The stalling and no start (2nd driving trip) after IAC gasket replaced. With larger proper sized air passages turned out to be that now it runs periodicly so rich it stalls--or at least wont start because it is too rich. It starts coughing puffs of black smoke when I do get an ignite. Holding throttle 1/4 way open while cranking got it to start, and then reving a few times cleared things up enough to drive 4 blocks back to home.

Calling ford dealer and other parts houses I get conflicting info on whether the numbers on the existing PCM are the wrong or correct Pcm for my Vehicle that has Calif emission label whith vaccum diagram, but another smaller sticker says complies with federal standards. How do I determine if CA or Federal? F4tf----pa is whats in my 94 e350 club wagon 5.8L auto 2wd. Whats your thoughts on which PCM to buy if I replace it. PA Im told is federal, while NB and NA are california. Ford dealers themsleves no longer can getany of them. Ford tells me it will need flashing if I provide part, while the parts house tells me it is "plug-n-play".
With the problem being intermitant, if I just start replacing items (because nothing fails or acts up in the shop), which groupiong of sensors and or PCM would you repace first. I want to do more than one to increase my odds, because Im getting sick of this and I am afraid to drive the freeways. Thanks
Was this
answer
helpful?
Yes
No

I am no expert where PCMs are concerned and would try to get my fellow technicians to assist on this.
Was this
answer
helpful?
Yes
No

STALLINGMONSTER
Short of replacing PCM-- if stabing in the dark, replace what items would be your first guess at throwing money at the van before I give it to the junk yard. I know this is unprofessional, but Im willing to take small gambles hopefully under $500 and definitely under $1000, before writting the whole van off as a loss.
Was this
answer
helpful?
Yes
No

KHLOW2008
When causes cannot be determined, the only way to go about is to test by substituting components and for your case, it seems to be something near the fuel pump replay. It could be wiring breakages internally and movements of the wires concerned can cause interruptions in circuits and the stalling.

I would not recommend any parts replacement for now unless you are able to borrow the components concerned to test.

Recheck the wiring continuity. With ohmmeter attached to both ends the wires that you had tried to increase contact, gently tug at the wire to check if continuity breaks.

Some wires would look good on th outside but internally the material have a clean break and continuity between the wire is via the broken joints touchng each other. Any movement in the wire would disrupt the continuity.
Was this
answer
helpful?
Yes
No
-1

STALLINGMONSTER
Can a momentary fuel starvation due to an open wire cause PCM to flood engine in an attempt to compensate, swinging so rapidly to fuel rich that the stall initially caused by fuel starvation has now beocme a a no start- or continued stall-- due to fuel flooding once pump power is restored at the intermitant electrical connection somewhere. All this happening within a few seconds to even a half hour later? Thanks
SPONSORED LINKS
Was this
answer
helpful?
Yes
No

KHLOW2008
Yes if the wire is connected to something that controls fuel supply or signals for it to the PCM, such the MAF.
Was this
answer
helpful?
Yes
No

GUIDE
Engine Stalls While Driving
Our technicians are ready to help

Losing Spark After 20 Minutes Of Run Time, Then Engine...

I Start It And It Runs Fine. After Im Going Down The Road And It Warms Up It Cuts Out Almost As If It Runs Out Of Fuel. If I Take My Foot...
Asked by jwalkinandtalkin ·
3 ANSWERS
1 IMAGE
1988
FORD E-SERIES VAN
VIEW MORE