headlights stopped working so I put in a new one and then another one. Now headlights work, but all other lights are out. Inside, running lights, tail, brake.
SPONSORED LINKS
Do you
have the same problem?
Yes
No

BILLYMAC
This truck had a prob with the fuse box or distribution box going bad and knocking lights out
SPONSORED LINKS
Was this
answer
helpful?
Yes
No

EDDIE7644
Had the same problem with my 97. The problem is the switch because when they made the switch they did not make it strong enough. The rating of the switch is too low so what I did was cut the two wires out of the switch and ran them to a stronger toggle switch. I have all my lights and they work great. It also sounds like you have another bad switch.
Was this
answer
helpful?
Yes
No
+6

BRUCE K LAPOINTE SR.
Which two wires?
Was this
answer
helpful?
Yes
No

BRUCE K LAPOINTE SR.
Mine is weird I have tail trial and running light if I ease the switch on and then if I hold the blinker switch all the wY open I have lights too
Was this
answer
helpful?
Yes
No
+1

CARADIODOC
You need to start a new question specific to your truck, and please be sure to list the engine size, transmission type, and mileage. We need that information to find the right wiring diagrams, and we use the mileage to determine the best suspects for a problem. This question shows up on our list as already having received a reply, and unlike other sites where anyone can chime in, this is an ongoing conversation between just two people. None of the experts will know you added a comment so they won't read it or have a chance to reply. That won't get you the help you need.

One comment that never appeared here has to do with overheated terminals on ignition switches, head light switches, and dimmer switches. A less-than-perfect connection between mating terminals in a connector, or between the contacts inside a switch, will cause heat to build up from the electrical current flowing through the small resistance. That heat causes the resistance to increase, and that creates more heat, ... Until finally the plastic connector body melts and the terminals become black.

Almost everyone addresses only one of the concerns, but that is never the entire solution. Most commonly, people will replace the switch, then assume the problem has been taken care of when the circuit works. Some of us see the black terminals, cut them off, and replace them with universal crimp-on terminals, then assume they solved the problem. You need to do both repairs. The heat from either defect will migrate to the other place, so if terminals got hot enough to turn black and melt the connector body, that heat has already damaged the switch's internal contacts. Those contacts are going to continue to overheat and that heat will damage the new terminals you just put on. Same if you just replace the switch. The terminals in the connector have been damaged already and will continue to generate heat that will take out the new switch. Just doing half of the repair is the cause for repeat failures.

For my first comment of value, you must replace the switch, then replace either the entire connector or the two black terminals. Typically I cut the two terminals out of the melted plastic connector body, plug the connector in that way, then install two new terminals to the wires and plug them into the switch individually. Those two wires will be really stiff for the first four inches from being so hot. Solder won't adhere to that, so cut that section off, splice in a new 4" section of the same gauge, then seal the splice with heat shrink tubing. Never use electrical tape in a car as it will unravel into a gooey mess on a hot day.

Crimp on the new terminals, but be sure to solder them too. Those crimped connections are only good for an amp or two, and they don't hold up well to vibration. Butt connectors don't have any place in my shop, and they don't seal out moisture.

My second wondrous comment related to this is the people who have the most trouble with head light switches are using fog lights all the time. Fog lights are considered not part of normal driving, so the head light switch doesn't take the very high additional current into account. We see the same problem with heater fan switches when people use them on the highest speed all the time. That s also not considered normal.

Related to that heater fan switch, there was a recall on these trucks to address overheating of one pair of contacts in the ignition switch. That pair turns on the heater fan, radio, power windows, and wipers. It is possible for that to add up to close to 20 amps, which is a lot to ask of any switch. The recall involved installing a short jumper harness with a relay to turn that high current on and off. All the ignition switch had to do after that was to turn on and off the tiny current to operate the relay. That was less than a quarter amp.
SPONSORED LINKS
Was this
answer
helpful?
Yes
No

Head Lights Will Not Turn On At Low Beam

I Have Turned On The Switch For The Headlights, But The Low Beams Do Not Turn On, But The Running Lights Do Turn On. But When I Switch...
Asked by Totaku ·
1 ANSWER
1998
DODGE RAM 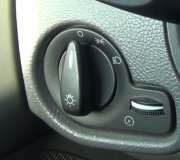 GUIDE
Headlight Switch
Our repair technicians are standing by ready to answer your questions.

Where Exactly Is The Head Light Switch And How Do I Get To The Wiring Of It. I Am Installing A Remote Starter Kit And Part Of It Requires...
Asked by sharrpie ·
1 ANSWER
2001
DODGE RAM

My Truck Came Factory Without Fog Lights. It Does Have Cargo Dome Light. I Want To Know If I Can Install Oem Factory 1999 Switch That Does...
Asked by zjrj5 ·
1 ANSWER
1999
DODGE RAM

My Low Beams Went Out At The Same Time And The Bulbs Are Just Fine. The Fuse Is Fine And All Of My Dash Lights Work Just Fine. What Could...
Asked by evaroc513 ·
1 ANSWER
1998
DODGE RAM

I Am Looking For A Wiring Diagram For The Wiring Going In To The Headlight Switch. The Fuse And Relay Are Good So I Want To Test Coming Out...
Asked by mattgoodson ·
6 ANSWERS
8 IMAGES
1999
DODGE RAM
VIEW MORE