I recently started to hear a knocking noise coming from my motor. I was told that it could be the connecting rod bearings or something in or around the crankshaft. Is either of these answers true?
SPONSORED LINKS
Do you
have the same problem?
Yes
No

CARADIODOC
Absolutely. Connecting rod bearings have a very specific clearance, or spacing, usually around.004". When they wear, they hammer against the crankshaft. Oil pressure will start to go down which will lead to accelerated wear of the other bearings. If caught early enough, the engine can be rebuilt and more of the parts can be reused. When the damage is more severe, the crankshaft and some of the connecting rods will also have to be replaced.

Your mechanic should be able to tell the source of the knock from the sound and by performing some tests or a visual inspection. Other potential causes include a broken hub on the vibration damper, a severely over-tightened serpentine belt, and a cracked flex plate at the back of the engine.

A cracked hub on the vibration damper, (harmonic balancer), will change sound when the serpentine belt is removed. The large bolt on the front of the crankshaft could also be loose.

A connecting rod knock will change when the spark plug is shorted out on the affected cylinder.

On The Way Home A Month Or Two Ago, My Astro Van Developed A Real Bad Knock. It Started Out For A Couple Of Miles When You Pushed The...
Asked by thedragn1 ·
2 ANSWERS
1998
CHEVROLET ASTRO

I Have A 98 Chevy Astro Van. It First Started When My Van Started To Leak Coolant From The The Intake Manifold. So I Took The Manifold Apart...
Asked by 1LOASTRO ·
1 ANSWER
1998
CHEVROLET ASTRO

I Have Been Having 'bucking' Problems With My Astro. So Far I Have Had The Top Hose Changed (cos It Was Leaking), The Rotor Arm...
Asked by mush ·
2 ANSWERS
1994
CHEVROLET ASTRO

Chevy Pickup 4.3 Has Power To Sarter Dash Insterments And Runing Lights Wont Come On Sometime Let The Key On For A Minute It Will Click On...
Asked by bobwallace25 ·
1 ANSWER
1 IMAGE
1996
CHEVROLET ASTRO
VIEW MORE 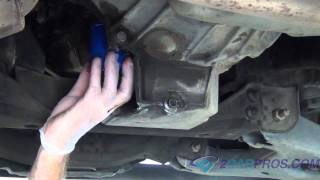