PSTEN17148
We replaced the brake booster on this vehicle and afterwards the brake warning light on the instrument panel came on and has not gone off. We have checked fluid level, checked emergency brake, checked the connections, everything we can think of. After checking the circuit it seems like there is a short in the wire. How do we find a wiring diagram? Or do you have any other suggestions? Please help! Family vacation starts in T minus 2 days!
Thanks so much!
SPONSORED LINKS
Do you
have the same problem?
Yes
No

CARADIODOC
There's a third switch that turns the red warning light on. That's the "pressure-differential switch that is turned on by the pressure-differential valve in the combination valve on the frame rail under the master cylinder. Follow the two steel lines from the master cylinder to that combination valve. The wire to that switch is right in the middle, on top of the assembly. Unplug that wire. If the warning light goes off, there is either a leak in half of the hydraulic system, or improper bleeding procedures caused that valve to move off-center, then it got stuck. Ford pressure-differential valves are extremely time-consuming and frustrating to try to reset. GM's and Chrysler's valves are spring-loaded to return to center, but they often stick. A good hard jab to the brake pedal usually pops them free, then they re-center on their own and the warning light goes off.

Given the service that was just performed, it is possible the float in the brake fluid reservoir dropped down and got stuck. Rather than banging on the reservoir in an attempt to reset it, we would rather know what caused the issue before we blindly make it go away. So, instead, carefully unplug the connector at the side of the reservoir. If the red warning light goes off, it was on due to that low-fluid level switch. Now that we know that, it is likely you only need to poke the float a little to get it to free up and return to its normal position.

There isn't much of a diagram to look at. This one is a part of it that shows the switches in the lower right corner. If you can't read it, I'll expand it some more for you.
Image (Click to enlarge)

The "brake" Light On The Dashboard Comes On For About 30 - 45 Seconds And Then Goes Off. It Will Do This Several Times, Mostly...
Asked by Anonymous ·
9 ANSWERS
3 IMAGES
2010
CHRYSLER TOWN AND COUNTRY

Just Picked Up This Town & Country Used, Still Have Warranty But Before I Take It In I Wanted To Dig Into Some Possibilities Myself. Only...
Asked by breinhold ·
3 ANSWERS
2006
CHRYSLER TOWN AND COUNTRY
VIEW MORE 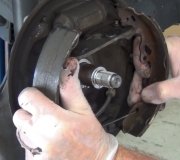