SUBAJ
Oil and coolant major leak. No engine light, bad smell, smoke. Mechanic says head gaskets need to be replaced. Sent to machine shop, replaced head gaskets and more, came back after three weeks with engine light on. Told to drive it to "clear out". Smell worse and began to smoke. Bad pistons, I was told. Back to completely rebuild engine. Eight weeks later (seven at machine shop, apparently) it comes back. No engine light, drives okay, leaks less, but still very bad smell and white/gray smoke especially when starting. Drove for two weeks as instructed. Seems to be getting worse, not better.
Took to former mechanic of mine (before I moved) who says he can see head gaskets replaced, but no evidence this has seen a machine shop. Says he could have put in a brand new engine for $2,000.00 in two to three hours, whereas I spent $1,600.00 for first go round.
Back to drawing board so as not to lose investment thus far (I have spent over $4,000.00 on this car in one year). Now current mechanic insists he had rebuilt from top to bottom, but he is unsure as to why repair did notwork and wants to put another used engine in car. I have no clue what to do. I do not believe this mechanic is deliberately delaying or cheating me, but what should I expect after a rebuilt engine? Does car normally need x number of miles to "clear out" residue? I have never missed an oil change, but this car has only been mine for three years.
And is it normal for a machine shop to keep engine for weeks?
SPONSORED LINKS
Do you
have the same problem?
Yes
No

HMAC300
I would find re-builder and take it back to them they normally guarantee for a year or 12,000 miles. Also find another mechanic. Then you will find out what has actually been done or not.
Was this
answer
helpful?
Yes
No

SUBAJ
By "re-builder" you mean machine shop or mechanic? Rebuilding mechanic has now, but if third time not "a charm", yikes. Is it normal for car after rebuild to need a certain amount of driving before it stops smelling and leaking? In addition to obvious problems of being without car and putting funds at risk, I am having difficulty trusting mechanic's skill/diagnoses at this point. Thank you
SPONSORED LINKS
Was this
answer
helpful?
Yes
No

HMAC300
Like I said in last reply find the re-builder and see if he has done anything if mechanic will not give you name then go see a lawyer. That would tell me he is lying through his teeth. If there is still oil/coolant on exhaust it will smell but only for a little while unless there is stuff all over the place and still leaking. I also said to find another mechanic I only say that from your description of what he has done with an ongoing problem.
Was this
answer
helpful?
Yes
No
+1

Near 58k Mileage, A Subaru Dealer Did The Left Side Gasket Repair Under Warranty. I Paid $700 For Right Side Gasket, Water Pump And Timing...
Asked by rrbowden ·
3 ANSWERS
2003
SUBARU FORESTER

I Have Been Told That My Head Gasket Is Leaking. Oil Is Showing Up On Garage Floor And Leaking Onto Some Portion Of The Exhaust And Smoking...
Asked by KEO20 ·
2 ANSWERS
2001
SUBARU FORESTER

What Price Range Should I Expect To Replace One Or Both Head Gaskets To Fix A Leaking Head Gasket? Also Should I Consider Having The...
Asked by Jmurrell ·
1 ANSWER
2001
SUBARU FORESTER 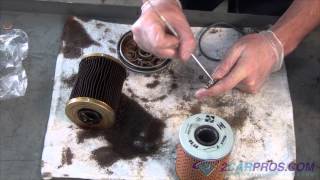