ANONYMOUS
How do I replace the fuse for the remote start

ROY B
There doesn't appear to be one just for the remote start, I would definitely start with the TSB below, if it was enough of an issue for GM to issue this, it is most likely your problem.

I did include the starter wiring diagrams below.

Assuming this is factory only, there was a TSB (Tech Service Bulletin)

One of the many components involved in the Remote Vehicle Starting System is the Hood Latch Switch. The state of this switch is checked by the BCM during a remote vehicle start request and the component must function properly in order for the vehicle to commence a remote start event. During the infancy of this option (RPO AP3/AP8) parts return analysis showed a significantly shorter than expected component life for the Hood Latch Switch shared across many different GM vehicles.

The switches currently being factory installed, and sent as service replacement parts, are vastly improved in design and suitably robust. Most hood latch switches currently returned under warranty are analyzed and determined to have no trouble found (NTF). It is understandable and desirable that technicians gain familiarity with the vehicles they service on a daily basis, however it is required that technicians follow Strategy Based Diagnostics before replacing this switch.
Important: The ONLY way to repair or replace a hood latch switch is to replace the LATCH ASSEMBLY. The switch CANNOT be serviced separately from the latch and is NOT AVAILABLE from GMSPO. Any effort to remove the switch from the latch will permanently damage the switch and void the warranty coverage of that part.

Remote vehicle start (RVS) begins as a Radio Frequency (RF) message received by the remote control door lock receiver (RCDLR) from a keyless entry transmitter. The RVS request is sent by the RCDLR to the body control module (BCM) via serial data line. The BCM monitors system conditions such as content theft deterrent (CTD) closures ajar status and body DTCs to determine if an RVS event will occur. If conditions are determined to be acceptable the RVS message is sent to the engine control module (ECM). The ECM monitors system conditions such as engine control parameters and vehicle theft deterrent (VTD) to determine if engine starting will be allowed. If conditions are acceptable the ECM will initiate engine starting. During the engine run time in an RVS attempt before the operator enters the vehicle the ECM may discontinue engine operation if system conditions require it or a message is received from the BCM requesting the engine be turned OFF.

Reasons an RVS event will NOT Happen

The RVS System WILL NOT operate if any of the following conditions are present:
A current vehicle DTC that illuminates the malfunction indicator lamp (MIL) is set - obtain vehicle DTCs.

Keyless Entry Transmitter is not Operational.

The vehicle is in Valet Mode.

RVS is Disabled through Vehicle Personalization.

More than 2 Remote Starts have been attempted.

The HAZARD switch is in the ON position.

Any Door is not locked.

Vehicle is not in PARK.

A vehicle speed sensor signal is detected by the ECM.

For additional assistance refer to Remote Vehicle Start Inoperative in the Electronic Service Information. This section will guide you through the complete Strategy Based Diagnostics and provide Specific Diagnostic Procedure Instructions. Check out the diagrams (Below). Please let us know what you find. We are interested to see what it is.
Images (Click to enlarge)

Where Do I Get Remote With Ignition Key And Do I Have To Do Anything Else?
Asked by taylor2121 ·
1 ANSWER
3 IMAGES
2015
CHEVROLET EQUINOX 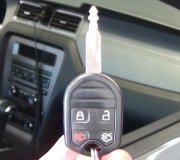 2006 Chevy Equinox 39,000 Miles My Key Is Getting Stuck In My Ignition, The Mechanic Cleaned And Lubed It Up. It Worked Good For A...
Asked by lwool ·
2 ANSWERS
2006
CHEVROLET EQUINOX

I Have A 2006 Chevy Equinox. The Problem I Have Been Having Is When I Go To Stick The Key In, It Wont Turn, Its Like It Is Stuck Not Sure...
Asked by bodushe ·
5 ANSWERS
2006
CHEVROLET EQUINOX

Computer Problem 2006 Chevy Equinox 6 Cyl Two Wheel Drive Automatic I Put A New Ignition In And The Key Won't Reset, How Do I Reset?
Asked by jacqulin2369 ·
1 ANSWER
2006
CHEVROLET EQUINOX

When Trying To Remove The Key From The Ignition It Will Not Come Out. We Have To Turn The Ignition On And Off Repeatedly, Play With The...
Asked by billk ·
1 ANSWER
8 IMAGES
2007
CHEVROLET EQUINOX
VIEW MORE