LOSACCO5
Had a Mitsubishi Montero Limited 3.5 L to the dealer for a timing belt, valve cover gaskets, tube seals, spark plugs. Car had 128,000 mi. On it. Less than three weeks later car lost all the oil and the engine is now toast. Dealer decided that the oil filter which had been on for 3000 mi. Was incorrectly installed by a oil change place, and that the gasket had come out of the seat on the casing which caused the oil loss, and they were off the hook because they did not change the oil. Had the oil and filter examined by the manufacturers oil tested fine, but the filter, (Purolator) had it's casing distorted by abnormally high oil pressure. If you compare the used filter to a new one you can easily see that the top was flat, but is now convex, and that is why the gasket failed. Doing research about abnormally high oil pressure the only cause which makes any sense is that there is a blockage in a oil gallery or in the by-pass valve in the oil pump. Do you think that this was caused by the recent work on the engine. I have been quoted by another dealer that it would be $1100.00 to take the engine apart to determine what the problem is which is ridiculious since they determined the engine is shot. Car had no problems before the service. Any ideas of how I might determine what happened, or any test that you could recommend to determine what the problem is. I am fairly mechanically inclined and many years ago have changed engines out myself, but with cars today I prefer to let the experts handle this type of stuff. Thanks, Tom
SPONSORED LINKS
Do you
have the same problem?
Yes
No

MHPAUTOS
The only way to really determine what has caused this is to dismantle the engine and do a full inspection, I presume the engine is not running? Normally a faulty pressure relief valve will be the main cause, but with out inspecting this and checking the engine it is just to hard to say with any certainty. But the fitting of the oil filter will not cause this that is certain, if the filter was loose, it would have blown the seal out and bot distorted the filter case.

FIXITMR
When you say engine is shot, you mean it's froze up? You could replace all the crank bearings and see if it will run. Usually just a couple bearings are bad/froze. You can clean journals and put new bearings in and start it and see what pressure is? All that is required is to pull pan? Unless of course someone drove it to long without oil? Too much rod damage may have occurred. Of course my optimism is based on german cars. Had an experience where oil ran out of a diesel and locked up. Did the described procedure and back on the road it went!
Was this
answer
helpful?
Yes
No

LOSACCO5
The car now has a loud upper engine knock, but it still runs. The car was run for a minute or so until it could be stopped safely with the oil pressure light on. Even if the immediate problem could be repaired once an engine has been operated without oil pressure, it is only a matter of time until something else goes wrong with it, in my opinion it is no worth fixing the head and next month a bearing goes out. So with the engine still operating is there anyway to determine what happened. Would removing the oil pan and oil pump be an option? The repair dealer did not note any oil leaks when the car was brought in for service, the dealer A different one) who examined the car after the oil loss noted that the oil cooler lines are now both leak a fair amount, hence I would think the the same high pressure incidence damaged them along with blowing out the gasket in the filter, and that the high pressure problem was not there before the repair. Tom
Was this
answer
helpful?
Yes
No

FIXITMR
So why not just take an oil pressure reading.
Was this
answer
helpful?
Yes
No

MHPAUTOS
If the pressure reading is abnormally high, I would be suspecting a pressure relief valve, but if you do already have bearing damage, this will affect any oil pressure reading as well, if the bearings have been hammered they will bleed pressure.

FIXITMR
Any possiblity the oil filter itself could be at fault?
Was this
answer
helpful?
Yes
No 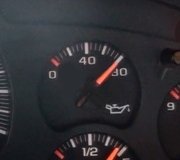 GUIDE
Oil Pressure High
Step by step guide on how to repair an automotive engine with high oil pressure, this information pertains to all internal combustion engines.

Ello! After Taking My Montero For An Oil Change I Was Informed There Was Less Than A Quart Of Oil In The Engine And It Had Metallic...
Asked by carissamc ·
1 ANSWER
2001
MITSUBISHI MONTERO

Engine Mechanical Problem 2001 Mitsubishi Montero 6 Cyl Two Wheel Drive Automatic How Do I Do A Tune Up Myself? Like Change The Spark...
Asked by b173airborne ·
3 ANSWERS
2001
MITSUBISHI MONTERO

The A/c Just Stopped Working On My Montero Sport 2001. When I Looked Under The Hood, I Found The Fan Belt Was Shredded And The Blower Fan...
Asked by smithaj ·
1 ANSWER
2001
MITSUBISHI MONTERO

Were Are The Marks To Top Dead Center At On A...

On The Cams Or On The Crank Balacer Pully?
Asked by koby1515 ·
4 ANSWERS
2001
MITSUBISHI MONTERO
VIEW MORE