What would cause it to shut off at an idel or.

WIL ZILEN
What would cause it to shut off at an idel or running down the road it gives no codes replaced all sencers complete tune up new pcm new ignition switch
Do you
have the same problem?
Yes
No

CARADIODOC
What do you mean by "all sensors", and what led you to them? That will add a lot of variables the Engine Computer has to relearn. Also, when the computer was replaced it will have to learn "minimum throttle" before it will know when it has to be in control of idle speed. The engine may not start or stay running unless you hold the gas pedal down 1/4" but that will not cause stalling while you're moving.

What is involved in restarting the engine after it stalls? Do you have to wait a half hour for it to cool down? Will it always restart right away or do you have time to check for spark? Have you checked for loss of fuel pressure? That is not monitored by the Engine Computer and will not set a diagnostic fault code.
SPONSORED LINKS
Was this
answer
helpful?
Yes
No

WIL ZILEN
It might start right back up or not at all most of the time it starts back up
Was this
answer
helpful?
Yes
No

WIL ZILEN
Today it stalled sprayed starting fluid down the intake and it made no differance
Was this
answer
helpful?
Yes
No

CARADIODOC
Dandy. That means spark is quitting, and since it starts up later it is likely a problem with the camshaft position sensor or the crankshaft position sensor. You can verify that by measuring the voltage on the dark green / orange wire at the coil(s) or any injector during cranking. You should find 12 volts for one second after turning on the ignition switch. What's important is whether that voltage comes back during engine cranking. If it does not there should be a diagnostic fault code indicating which signal is missing and the circuit that needs further diagnosis.

Which engine do you have? If you already replaced the crankshaft position sensor, did you have a spacer on the end to set the critical air gap? If that gap is just a little too big it can result in intermittent stalling with a failure to restart until it cools down. Those sensors also commonly become heat-sensitive and fail when air flow through the engine compartment is slow, then they work again after about a half hour.
Was this
answer
helpful?
Yes
No

WIL ZILEN
Its the 5.9 360 replaced the crank sencer didnt make a diff then it all cleared up about 8 months ago till this past sunday it started up again
SPONSORED LINKS
Was this
answer
helpful?
Yes
No

CARADIODOC
If no codes are setting it's hard to know which circuit to start in. About all you can do is measure the voltage on that dark green / orange wire during engine cranking, and if it's missing you can check for 5.0 volts to the two sensors and 0.2 volts on their shared ground wire. Beyond that you need a scanner that displays live data so you can see which signal is missing. They will be listed as "present" or "no" during cranking.

If that voltage is there it means the automatic shutdown relay is being turned on and those two sensors have to be working. That leaves the ignition coil and the wires and connectors to it as the only suspects. The injectors and fuel pump will still be working so you'll smell raw fuel at the tail pipe.
Was this
answer
helpful?
Yes
No

I Can't Find A Replacement Part #, Or Information On How To Remove And Replace This Part. Can You Help Me With This?
Asked by Grandmamarta ·
1 ANSWER
2003
DODGE RAM 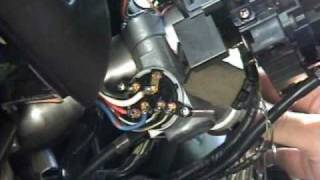 Trying To Help Out A Friend And Possibly Buy The Truck He Replaced The Ignition Switch And Now It Wont Start. Is There Something To...
Asked by JMANN ·
3 ANSWERS
2003
DODGE RAM

How Do I Replace My Ignition Lock
Asked by rickz200mph@yahoo.com ·
1 ANSWER
1994
DODGE RAM