DANIEL H
Only one radiator fan working
Do you
have the same problem?
Yes
No

CARADIODOC
There is only one fan.
SPONSORED LINKS
Was this
answer
helpful?
Yes
No

DANIEL H
It has dual fans
Was this
answer
helpful?
Yes
No
+1

CARADIODOC
Any chance one of them is an aftermarket added-on fan? I double-checked the wiring diagram and they also only show one fan for the radiator and AC condenser.

Hold on. I just checked one of the web sites I use for reference a lot and they do indeed show a dual fan in one assembly. Can you see how many wires are in the electrical connector? If there's only three, one is a ground wire, then the other two could be one for each fan. I can't tell from the diagram if there's two motor wires or if they're a low-speed wire and a high-speed wire.

There's a relay box on the center of the core support over the radiator. It should have three relays in it that appear to be the same. Try swapping them around to see if the same fan still runs. That will tell us if all of them are okay.

The next thing is to measure the voltages on the two feed wires but that has to be done when the fans are supposed to be running. One is red / orange, and one is orange / light blue. If you find 12 volts on each of them at any time, yet one fan doesn't run, that motor has to be bad or the connector terminals are corroded.

Another trick is to remove the cover from a relay, reinstall it that way, then squeeze the contact. You can measure voltages at the motor that way or just see if the fan runs. That's easier than trying to figure out which wires to jump in the relay box to make the tests.
Was this
answer
helpful?
Yes
No
-1

I Recently Installed A New Radiator. However The Car Is Overheating And It Seems That The Water Is Not Circulating. Maybe The Thermostat Is...
Asked by laminate ·
19 ANSWERS
4 IMAGES
1997
LINCOLN CONTINENTAL 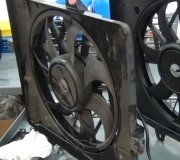 GUIDE
Radiator Cooling Fans
Step 1 - There are primarily two types of engine radiator cooling fan, electric and manual. A manual fan is connected to the engine drive pulleys and is controlled by a...

Replaced Head Gasket And Installed New Radiator Cap. When Car Is Driven It Still Leaks Out Of The Overflow Tank? Any Ideas? Thanks!
Asked by rv1969bbc ·
1 ANSWER
1999
LINCOLN CONTINENTAL