TRUCKERJASON
I bought this truck about a week ago and drove it about 300 miles back to my hometown with no trouble at all. A few days later I was out in the truck and was crossing a bridge that had a rough end on it that jarred the truck as I crossed it. As soon as the truck jarred it was like the key was shut off. Got it on the shoulder and tried cranking it over, it would crank all day but never would hit. Started checking fuses and the ECM fuse was blown. Changed the fuse, started the truck without problem and let it idle about 5 minutes. As I pulled back onto the highway I crossed a rumble strip that jarred the truck again and it immediately blew the fuse. I changed the fuse again but this time as soon as I turned the key on it blew the fuse, didn't even get to attempt to crank it. The only other problem I've encountered with the truck is the gauges acting a little odd at times. The oil pressure gauge reads low and then jumps to high kind of fast (it has a new sending unit and a fresh oil change and doesn't smoke at all so I doubt any motor issues). Also the voltage gauge always reads right at the edge of overcharging into the red but it has a new alternator and battery. After reading several websites regarding these symptoms people have suggested the ECM is bad, as they have replaced their ECMs and cured their gauge issues. Anyone have any thoughts?
SPONSORED LINKS
Do you
have the same problem?
Yes
No

CARADIODOC
GM did have a lot of Engine Computer trouble around that time period, and they often acted like they had bad solder connections, but given the age of the truck, that computer has probably been replaced a couple of times already. Also, the computers often caused stalling or no-start conditions, but not blowing fuses. I would be more suspicious of a wiring problem like the wires to an oxygen sensor heater falling down onto hot exhaust parts, melting, and grounding out.

A simple trick to finding a short is to replace the blown fuse with a pair of spade terminals, then use small jumper wires to connect them to a 12 volt light bulb. A brake light bulb works well. When the circuit is live and the short is present, the bulb will be full brightness and hot so be sure it's not laying on the carpet or against a plastic door panel. Now you can unplug electrical connectors and move things around to see what makes the short go away. When it does, the bulb will get dim or go out.

For intermittent problems like yours the bulb may be dim already. Watch what takes place when it gets bright. That's when the short is occurring. It could be due to the rocking of the engine when you shift between reverse and drive. It could be due to the body flexing when you drive over bumps in the road. The bulb limits current to a safe value when the short occurs, in this case about one amp. If the engine won't start with a brake light in the circuit, try a headlight bulb. The low beam filament will limit current to five amps, and the high beam filament will allow about six amps to flow.
SPONSORED LINKS
Was this
answer
helpful?
Yes
No
+2

Hi, A Few Days Ago I Was Out Driving And Stopped At A Business For A Few Minutes. I Turned My S10 Off While I Was There. When I Went...
Asked by LadyStanwyck ·
11 ANSWERS
1991
CHEVROLET S-10 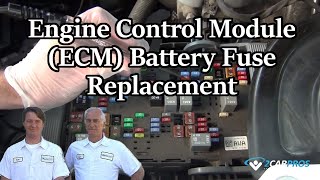 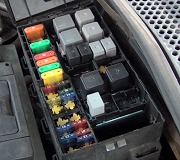 GUIDE
Engine Fuse Blows
Each manufacturer designs their engine wiring systems a little differently, but one thing that stays the same is what an engine fuse supplies power to, such as the engine...

Is There A Way To Check The Ecm Computer For Proper...

My Son Just Bought An S-10 And It Ran Fine For A Few Days Then He Parked It Went To Start It And It Wouldn't Start. Checked The Fuses. It...
Asked by butchslady ·
1 ANSWER
2001
CHEVROLET S-10 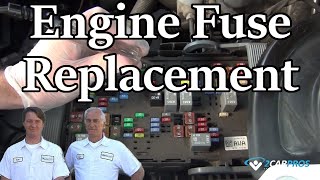