EJN888
Where is the radiator located on my 2002 Chrysler 300m also how do I check my anti-freeze
Do you
have the same problem?
Yes
No

CARADIODOC
That is best left to your mechanic. You can buy a tester, but if you don't know where the radiator lives, it is going to take a lot longer to explain the procedure than the minute it takes for him to do it during other routine services. This is typically done, (upon your request), during things like oil changes, and at no extra cost.

There's two tests involved. The first is the freeze point. If you haven't been adding any antifreeze or water due to a leak, the freeze point is the same as it was last year. That's not going to change. What is just as important though, and few people realize it, is there's water pump lubricant, seal conditioner, and anti-corrosion additives that wear out in about two years. That is why it's recommended to replace the coolant every two years. If that applies to you, let your mechanic worry about adjusting the freeze point when he's done. It is not always necessary to flush the system. A "drain and fill" will be sufficient if there are no other problems.

The acids that build up in old coolant are responsible for corroded radiators, heater cores, and cylinder head gaskets. This is a real big problem on GM vehicles but it's still a good practice to replace the coolant on all car brands. The second test involves dipping in a test strip to test the acidity of the coolant. Some people want to sell you a chemical to neutralize the acids that normally build up, but that's like putting a patch on a problem.

If you still want to pursue this yourself, I'll be back tomorrow night. You'll need a tester, and they're not very expensive. You can find them at any auto parts store, hardware store, Walmart, and Sears. They will have either five or six balls that can float inside a plastic cylinder, or a pointer and a scale printed on the side. There is a much more accurate "refractometer", but those are horribly expensive.
SPONSORED LINKS
Was this
answer
helpful?
Yes
No 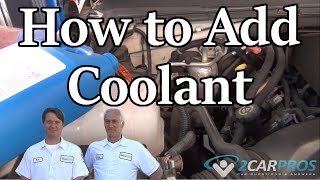 Is There An Additive That Can Fix A Very Small Leak Of Antifreeze On The Engine Water Return Assembly Into The Return Hose?
Asked by Orlando22 ·
1 ANSWER
2005
CHRYSLER 300

My Car Is Fine Until I Drive It About Ten Miles Then It Overheats And Leaks Coolant. What Is Causing This?
Asked by moravian2 ·
2 ANSWERS
1999
CHRYSLER 300

My Chrysler 300 M Started Over Heating, We Checked And Replaced Fuses, Censors And Finally The Thermostat. After Changing The Thermostat...
Asked by elexa ·
1 ANSWER
1 IMAGE
1999
CHRYSLER 300

My Antifreeze Was Leaking From The Bottom It Turned Out The Pressure Cap Was Bad I Bought A New Cap Fixed The Problem I Went To Fill It Up...
Asked by garcia_2424 ·
1 ANSWER
2006
CHRYSLER 300
VIEW MORE