PINKSTONKD
Car wouldn't start. Charged battery, still wouldn't start. Wiggled wires off the battery connections. Discovered that a 10 gauge wire, connected via crimp-on ring connector, that slips over the "jump start battery post, " was severed. Found the other end of it and it looks to go through the firewall under the dash to either the Fuse box or the BCM (I think. I'm not a mechanic.). My first thought was to butt splice the wire with a good quality, heat shrink butt splice. But by the time I cut back enough wire on each side of the destruction caused either by rodent damage or rubbing against the hole in the firewall. Manufacturer didn't see fit to put a grommet there. I don't see teeth marks on the wire, just a lengthwise slice and fraying of the aluminum wire. I may not have enough wire left after cutting back to good wire, to complete the repair. I would like to replace the whole run of wire with a new piece of stranded copper which I have in appropriate length and gauge, but as I can't see where it connects, I don't know what connector I'll need to put on it. I also don't know if I'm physically able to get to the location it needs to connect to. (Old lady, bad back with many surgeries under my belt.) I also know it's not a good idea to splice copper to aluminum. What all is required to access the space this wire is supposed to connect to? And what kind of connector goes on the BCM or fuse box end? Car is listed above convertible touring edition and I can't drive it to a shop as it sits. Also right before I had the no start condition, it threw a C Can Bus error. Something about a fuel sensor.
SPONSORED LINKS
Do you
have the same problem?
Yes
No

I need to know which wire it is. Is it on the battery? What color is it? Does the starter engage when you turn the key? When you say jump start battery post, are you referring to the smaller wire on the starter?

I have attached a pic of the entire starting circuit below. I had to break it down to make it readable. Take a look through it and let me know if you see or recognize which wire it may be.

PINKSTONKD
It is red, 10 gauge, oxygen free aluminum, looks like it has a fuse or a fusible link black rectangular box about an inch and a half from the positive jump start post. Connects to the positive jump start terminal as the battery itself is in the wheel well, and runs through a hole in the firewall where it severed, which is located behind the brake pedal, and then disappears behind a trim panel right behind the hood release latch in the cabin. It's not the alternator wire as that has some kind of woven heat shielding on it. (Also red) I can't see the starter without climbing under the car, but it's obvious where the wire had gone by the fact that I found both ends and both are the same gauge with the same translucent red insulation.
Oh yeah, I've got no power, except at the battery. Can't even move my electric seat back to get down in there. No cabin lights, no nothing.

I tried to snap a couple of pictures with my cell, but they're pretty worthless. Thank you for trying to help though. It's greatly appreciated.
Images (Click to enlarge)

KASEKENNY1
If I can jump in here, is there a history to this? Did you just buy this vehicle? This wire is not a factory installed wire. This appears to be a B+ wire that fed an amp for an aftermarket speaker system. Or at least some other large add on accessory that requires a lot of current. The factory does not use these large of wires direct from the battery post like this with the add on fuse like that. They run everything through the fuse panel so if you are not using it, I would just remove it because you don't want a live wire just laying there like that. I assume the fuse in that protective cover is blown which is why it is not arcing when it touches some metal.
Was this
answer
helpful?
Yes
No
+1

My Car Is A '99 Chrystler Sebring Jxi Convertible With About 117,200 Miles On It. My Father Bought A New Battery For It About A Year Ago...
Asked by zcedmondson ·
1 ANSWER
CHRYSLER SEBRING 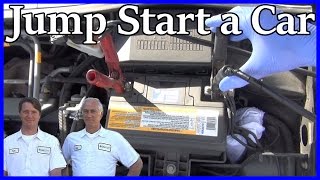 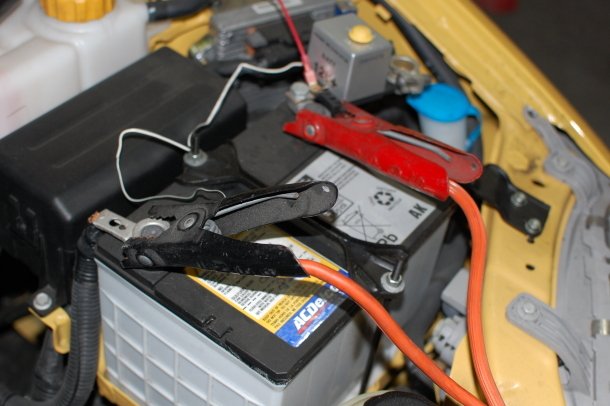 GUIDE
Battery Jump Start
A battery jump start using is a good way to get your car going using jumper cables which you can get from Amazon for between $16.00 and $38.00 (US). We recommend a good set...

Where Is The Battery Located In This Car And How Do You Jump Start It?
Asked by sebring2006 ·
1 ANSWER
2006
CHRYSLER SEBRING

2006 Chrysler Sebring Where Is The Battery Located

Can You Give Me An Estimate On The Price To Have The Battery Changed.
Asked by thaboy11 ·
1 ANSWER
2006
CHRYSLER SEBRING

Why Does My Battery Keep Dieing?

My Car Won't Start. I Used A Multi Meter And Checked The Battery While It Was Running And It Was Reading Over 14 So I Know The Alternator Is...
Asked by alexbail07 ·
1 ANSWER
1998
CHRYSLER SEBRING
VIEW MORE 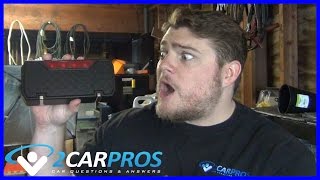