RSOARD83
I I'm trying to install a Clarion stereo head unit in my van with an Infinity Premium sound system.
My problem is, is there a pre existing amp in it already? If so, how do I trace it? Where would it be located? Can I Iuse it by splicing wires if I trace them?
SPONSORED LINKS
Do you
have the same problem?
Yes
No

CARADIODOC
The amplifiers are built onto the speakers. Chrysler has a better system than GM and Ford. All of their radios put out speaker-level output and can be used with or without the amplifier. The amplifier only modifies the tone conditioning for the shape of the vehicle. They don't increase volume or power.

Most of the Infinity systems came with the CD / cassette combo radios that were built for them by Mitsubishi. You will not find a higher-quality radio. What you must be aware of though is they put out less bass than normal, then it is made up with the amplifiers. If you use one of the less-expensive radios, you'll have too much bass unless you turn it way down.

Some of the Infinity systems had just a CD radio. Those were built by Alpine, and they have a few more common problems. There was also a cassette-only radio built by Alpine that was used with Infinity speakers, but most were made by Chrysler and were used with standard speakers.

Your Infinity speakers need 12 volts to run the amplifiers, otherwise all you'll hear is the tinny sound from the tweeters in them. They get the 12 volts through a relay that is turned on by the radio when it is on. One of the wires on the end in the black plug, as I recall, is for "power antenna / amp". That one has to be hooked to the "Power antenna" wire on your new radio.

Be aware too there is no ground wire in the gray or black plugs. A lot of people mistakenly measure resistances and find the tail light or dash light wires and use those for a ground, then they have problems with blowing fuses. The ground wire is the black one clipped to the back of the radio, or the braided strap that's bolted to it.
SPONSORED LINKS
Was this
answer
helpful?
Yes
No
+3

New Stereo But I Am Not Getting No Sound

I Have A2001 Town & Country. I Installed A New Stereo But I Am Not Getting No Sound. The Equipment Has Power. I Read About The Amp Cable But...
Asked by DD 17 ·
1 ANSWER
3 IMAGES
2001
CHRYSLER TOWN AND COUNTRY 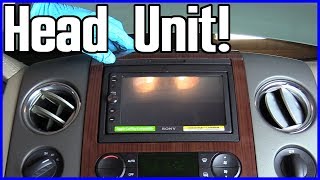 Where Do I Find Latches/fasteners To Remove Radio From Dash To Replace?
Asked by russellemiller ·
3 ANSWERS
2001
CHRYSLER TOWN AND COUNTRY

I Had An Aftermarket Stereo Installed. The Van Comes...

I Had An Aftermarket Stereo Installed. The Van Comes With A Factory Dvd Player, But Now It Will Not Work. I Know That When I Had The...
Asked by Daniel0316 ·
1 ANSWER
2005
CHRYSLER TOWN AND COUNTRY

Interior Problem 2002 Chrysler Town And Country 6 Cyl Front Wheel Drive Automatic How Do I Remove My Radio And The Face Panel To...
Asked by keule ·
1 ANSWER
2002
CHRYSLER TOWN AND COUNTRY
VIEW MORE