When I turn the steering wheel from side to side there is a clicking or popping sound. Found a worn stabilizer bar link that was bad on the pass. Side replaced it and its a little better, but while driving you can turn the wheel from 11:00 to 1:00 before it actually "catches" and turns the tires. I checked the steering gear and it moves a little fom side to side. Checked the bolts that hold it on and there tight. Any ideas? Thanks.
SPONSORED LINKS
Do you
have the same problem?
Yes
No

Let me know.
Was this
answer
helpful?
Yes
No

RANDY B
You found the cause. The rack should not be moving side to side. Instead of bolting it directly to the body, it is sandwiched between two metal plates on each end that are riveted together. Rubber isolators are between the brackets and the rack housing. Check to see if the movement is taking place between the housing and brackets. There was a service bulletin related to those brackets causing a squeaking noise, but I think that was on earlier models.

You can also have someone move the steering wheel back and forth a few inches while you inspect the steering shaft for looseness. In particular, look at the universal joint. Jacobandnickolas is right about play in the rack itself, but it's relatively uncommon. When it does occur, it's caused by a worn spool valve / input shaft and is accompanied by fluid leakage from the shaft area. It can be hard to diagnose because it's buried inside a tunnel formed in the firewall. And yes, don't overlook the outer tie rod ends. A lot of shops will perform a free steering and suspension inspection while doing other service.

When Brake Is Applied Or Wheel Is Turned Slightly Car Quickly Drifts To The Left Approx. 1-2 Feet; Always Feels Like There Is No Steering...
Asked by rsmid ·
1 ANSWER
1996
CHRYSLER LHS

Steering Was Normal Turning Right, But Extremely Difficult To Turn Left; Followed By A 'squishing' Noise, And Then I Had Steering Fluid...
Asked by Richie333 ·
19 ANSWERS
1999
CHRYSLER LHS

I Made The Mistake By Taking Out Both Inner Tie Rod...

My 2000 Lhs Has Power Steering Turning Right But Not Left. Is This Indicitive Of A Pump Problem Or A Rack Problem?
Asked by GReisen ·
4 ANSWERS
2000
CHRYSLER LHS
VIEW MORE 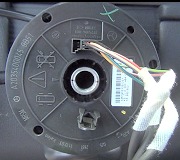