BG1955
I went to a nationwide repair center on friday night because my car felt like it was in need of an alignement. The repair place "aligned" it and I bought two new tires as well. Not even 12hours later the car breaks dpwn, I tow it back to the repair center and they tell me the frame rusted out and the axles came out, My question is couldn't the technition tell that the frame was bad and that the alignement did not take very well? Obviously it wasn't the alignement that was bad
SPONSORED LINKS
Do you
have the same problem?
Yes
No

CH112063
The Alignment consists of camber and toe adjustments only, the first steps in an alignment are to check the front end and tires also. If the K-frame is rusted, its possiblr for it to look ok and seem tight enough at the time of alignment, hold any adjustment ok, and then go down the road and in a couple of bumps the frame could let go as far as stability and strength are concerned. It is surely possible, but unlikely, and thats it.
SPONSORED LINKS
Was this
answer
helpful?
Yes
No

CARADIODOC
There was a recall for this frame problem. It involved bolting on two metal braces under the k-frame. It was not to prevent it from rusting; it was to prevent the frame from separating and the axles pulling out from the transmission. It was only meant to prevent loss of control of the vehicle. They called it the "Salt Belt Kit". Why was it never done to your car? Chrysler sent out a lot of letters to owners of these vehicles. There was no charge for the modification, but they had no control over vehicles the owners didn't bring in.

Most cars up here in Wisconsin are full of rust. No one can tell when something is about to break by just looking at it. If your mechanic had warned you about the cross member, and it did NOT break, you would accuse him of trying to rip you off with unneeded repairs. To say he should have known what was going to happen in the future is just plain unfair. Mechanics are always held to much higher standards than doctors. I've never heard of someone being angry with their doctor because he didn't know they were going to get seriously sick in the future. When a problem isn't fixed properly the first time, you take the car back to the mechanic, and he gets another shot at it. Doctors just bury their mistakes.

I Replaced The Top 5 Years Ago And It's Been Too Tight Ever Since. I've Left It In The Sun To Stretch, Kept The Top On For Months - Did...
Asked by andreadopp ·
1 ANSWER
1995
CHRYSLER LE BARON 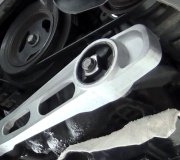