VIKEZFAN
I have a 1995 Chevy S-10 Blazer 4x4. About a month ago it started acting up. It would seem to miss once in a while especially while accelerating between 20 and 50 MPH. It stayed this way for about a month and then it got progressively worse to the point where one day I walked out of a store to find it would just crank without firing. It eventually started but has not run right since. The only code I was receiving was a catalyst system code. The exhaust system was falling apart so I had it replaced from the catalytic converter on back. This got rid of the code but not the problem. I had replaced the EGR valve, plugs and plug wires a few months back for another problem. This time I noticed corrosion on the coil connection to the distributor so I replaced the coil and the coil wire. I have had the ignition module tested (good) and replaced the distributor cap and rotor. I got a fuel pressure tester and it read 60lbs when I first turn the key and it bleeds down to 52-56lbs. When I can get the motor running, the fuel pressure is 56lbs at idle and 60 when I give it some gas. So, back to the spark. When it is running, it runs smooth at idle, but when I give it a little gas it starts running really rough. I can not go past about half pedal or it will die. It will also backfire through the intake occasionally. This means timing. After replacing the distributor cap and rotor, I cleared the OBD2 codes. There are, at present, no codes. No matter how bad it runs, nothing is coding. I was suspecting the camshaft or crankshaft sensors, but I thought that they should code if bad.

Can anyone help me out on this? I am at a bit of a loss as to where to go next on it. I hate to just randomly replace parts.
SPONSORED LINKS
Do you
have the same problem?
Yes
No

VIKEZFAN
The fuel pressure does not drop when I accelerate. That is when it runs. It is back to not even starting again. It cranks but won't start. Spark looks good and fuel pressure is still up. No codes. Replaced O2 sensor because it looked old and badly fouled. Nothing.

Don't have time to do more tonight.
Was this
answer
helpful?
Yes
No

OBXAUTOMEDIC
Not to step on any toes here.

But, what color is the Spark. It should be a Bright Bluish/White. If it is Orange the spark is weak.

Have you checked the timing as docfixit suggested?
Was this
answer
helpful?
Yes
No

VIKEZFAN
I took off the plenum and took a couple of pictures. I was wondering if the amount of 'washing' shown in this picture is worth worrying about. As you can see it runs from the fuel pressure regulator down to the bolt below it. There was a tiny puddle by this bolt. You will also notice that the back of the regulator is clean. 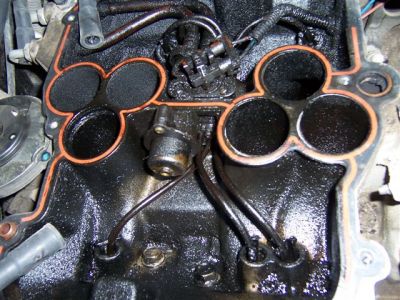 I have not gotten my hands on a timing light yet. My friend is bringing one over later. Where is the wire to unplug to put it in basic timing mode? I have looked under the carpet by the passengers feet and on the distributor. I must be missing it somewhere.
Was this
answer
helpful?
Yes
No

VIKEZFAN
I checked that the timing mark lined up close when I bumped the engine to number one cylinder and it lines up. So, I decided to go ahead and replace the fuel injector spider assembly. It runs great now.
SPONSORED LINKS
Was this
answer
helpful?
Yes
No

I Had A Blown Head Gasket On #5 Cyl So I Pulled Both Heads And Had Them Checked And Milled. We Put It All Back Together Including New Parts...
Asked by xaxxas ·
3 ANSWERS
1995
CHEVROLET BLAZER

1995 Chevy Blazer My Blazer Takes A Lil Longer To Crank. If I Cut It Off And Crank It Again It Fires Right Up. It Seems Over Time It...
Asked by blazerguy95 ·
2 ANSWERS
1995
CHEVROLET BLAZER

I Believe It Slipped Timing Because It Was Running Very Well Then Made A Quick Sound And Started Smoking And Ran Like A Junker And Now It...
Asked by abbottallan ·
3 ANSWERS
1989
CHEVROLET BLAZER
VIEW MORE