FLYGUY86
I was told to replace the cam position sensor. I can't find any good diagrams of where these are located. Thanks for your video How to Service Throttle Body Housing and Plates Toyota Highlander V6 3.0 2001-2007. I think two of the sensors are back there. Thanks for your great videos and your help.
SPONSORED LINKS
Do you
have the same problem?
Yes
No

STEVE W.
Okay, those codes could be a bad sensor or bad wiring. Both can set them. However, in your case you have circuit codes for both sensors and they are on opposite sides of the engine. As it would be extremely rare for both to fail at the same time with the same fault, I doubt the sensors are the problem. Instead, I think you have a wiring issue in circuit A.
One big question first, does it start and run? I ask because no signal from either cam could also be a failed timing belt that isn't turning the cams to generate the signal.
To get to the sensors you simply remove the air cleaner, and the sensors are right there on top of each head at the rear of the engine. I would do the resistance test on each sensor first. If they test close to the same and in spec I would inspect the wiring, you are looking for a break or short in a wire that they both share which would be the same one that feed the crank sensor as well. Attached are the tests and wiring diagrams. Now if the engine doesn't run at this time, I would open the timing belt cover and check that the belt is intact and moving the cams, you can do that by just removing the five bolts and gently opening the cover to watch the belt.
Images (Click to enlarge)

FLYGUY86
Wow! Thank you so much. If the timing belt is broken, can I just replace it or is this an interference engine and the valves are bent?
Was this
answer
helpful?
Yes
No

STEVE W.
The VVT version you have is an interference engine. I would assume valve issues until you could prove it was okay. Does the engine start? That alone would tell you about the belt. If no, then I would check the belt. It's possible that it's a wiring issue, these sensors work by generating a small AC signal that doesn't take much to squelch.
Was this
answer
helpful?
Yes
No

I Recently Rebuilt An Engine On My Suv Replacing The Head Gasket. I Set My Timing On The Right And Left Cams Using The Timing Marks, And...
Asked by mikejohnpayne ·
2 ANSWERS
2002
TOYOTA HIGHLANDER

Would Please Tell Me How To Get The Engine Id Number Of My Car?
Asked by mimhnguyen ·
9 ANSWERS
2005
TOYOTA HIGHLANDER

I Have A New Toyota Highlander 4cyl I Need To Know What Tools I Need And How To Proceed With Changing The Oil And Oil Filter Myself. Any...
Asked by bruce.shulman ·
11 ANSWERS
1 IMAGE
2009
TOYOTA HIGHLANDER

Should I Replace My Engine

Hi My Name Is Richard I D Like To Know If A 4 Cylinder Engine Would Fit A 6 Cylinder Body Of A Toyota Highlander I Would Appreciate Your...
Asked by Thetechnician55 ·
1 ANSWER
2003
TOYOTA HIGHLANDER
VIEW MORE 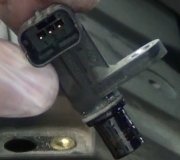