Air conditioner Dealer put in 0.8 lb, with dye, but found no leaks

JWSIGLER
Figuring this was normal loos, I recharge the system. In July the AC started to quit so took it to the dealer for repair under the extended warranty. Dealer put in 0.8 lb, with dye, but found no leaks. October 1st, the AC quit again. Returned to dealer and they put in 1.3 lb, with dye and again found no leaks. Extended warranty expired in Nov. And now AC has quit again. Extended warranty people have agreed to give me one more chance to take the truck to a dealer, get the leak diagnosed, and they will pay for the repair. Warranty people tell me Dodge has history of failed evaporators, but dealers will only use dye and only check evaporator drain for evidence of dye. I assume 1.0 lbs in two months is a big leak, and that the dealer would see a dye leak in the engine compartment, so the only logical conclusion is an evaporator leak. I have one chance left to get this fixed under warranty. Any Suggestions?
SPONSORED LINKS
Do you
have the same problem?
Yes
No

CARADIODOC
I haven't heard of a "history" of failures, but when no other leak can be found, the evaporator is the logical suspect. The dye might not show up at the drain tube if the weather isn't very humid. The smallest part the AC system's job is to lower the air temperature a little. Its biggest job is to remove the humidity and that is what drains out and brings the dye with it. It sounds like you have a leak which can be hard to find but using this video and guide will help.

I think I would insist on having the evaporator replaced, but it's possible you will get stuck with the bill if the old one isn't leaking. Regardless, try to leave the truck with the shop longer if possible so they can try different things to either get the leak to show up or at least verify it is still leaking somewhere.
SPONSORED LINKS
Was this
answer
helpful?
Yes
No
+1

JWSIGLER
Is a 1.0 lb of freon leak for 3 months a "big" leak that would be easily detectable? Also, over the last 6 months I would guess that 2.5 lb of freon with dye in it has leaked out of my AC. How long does the dye stay around once it has leaked out? Does it degrade with time, or if it is pooled and dried in the bottom of the evaporator housing will it still be visible under a UV light?
Was this
answer
helpful?
Yes
No

CARADIODOC
Dye doesn't evaporate or deteriorate but if the AC system is working enough to condense humidity on the evaporator, the water can wash the dye out over time. For that to happen, the AC has to be working meaning more refrigerant and dye is leaking out.

A big leak would empty the system in a day or two. Those can usually be found with the electronic leak detectors. Dye is more useful with slower leaks like you described. Electronic leak detectors detect the absence of oxygen in the air which occurs around the escaping vapors. Small leaks don't displace enough oxygen to be detected.

Ask if the person working on your truck is the dealer's AC specialist. They will know more about where to look and what to suspect than the other guys. Anyone can check for a leak, but it's when things get more complicated that the specialists are called in. I'm not a specialist, but I think I would start by pulling the 4" molded rubber hose off the drain and looking into the plastic drain spout with a mirror. The dye should show up on the inside of the rubber hose too. That hose is molded closed to a thin slot on the end to keep debris and cold air out, so there isn't much place for the dye to be seen on the outside. That means it could be easily overlooked.

Also, just because there's no dye in the hose doesn't rule out the evaporator. It could just mean not enough moisture has been condensing to make the water run out the drain tube. Water IS running out if you see it dripping onto the ground under where the front passenger's feet would be.
Was this
answer
helpful?
Yes
No

CARADIODOC
Another clue to a leaking evaporator is if the air coming out of the ducts is too cold right after recharging the system. Pressure in the evaporator is carefully controlled to never go below around 40 pounds which coincidentally equates to 40 degrees. That is high enough to prevent the condensed water from freezing into a block of ice that would block air flow. When you blow a lot of 80 degree air through a 40 degree evaporator, you get 60 to 65 degree air from the ducts, which can be uncomfortably cold. If you stuff a thermometer in a center duct and find the air is colder than, ... Oh, ... Around 50 to 55 degrees, that is not due to air that's being cooled. That is due to escaping refrigerant. I have the same stuff in spray cans used to cool components in car radios and tvs when they're suspected of having a thermal failure. That stuff can get down to -60 degrees when it vaporizes. A properly-working AC system can not deliver air that is below about 60 degrees so if you find anything colder, follow the cold to the source of the leak.

Even a big leak in the evaporator can be hard to find with an electronic leak detector because first of all, pressures are higher in the "low side" of the system when it's turned off. The pressure in the entire system will be fairly close to outside air temperature, so let's say 80 degrees. That's when a leak in the evaporator is more likely to occur but the vapor is going to pool inside the heater box where the leak detector can't reach. When the system is running, the compressor pumps the high side, (under the hood) to a higher pressure so a leak there will get worse, and the vapors will be blown away by the radiator fan and not be detected. The pressure in the evaporator goes way down when the system is running, so a leak there will slow down or stop. Low-side leaks inside the cab typically get worse when the system is off, but the fan has to be run at a slow speed to blow the vapors out of the ducts.

To complicate it even more, by running the heater fan with the engine off, a leak under the hood can produce vapors that get drawn into the fresh air intake, blown through the evaporator, and come out the ducts where it can be falsely detected as an evaporator leak. Now you get an idea of why some leak locations can be so hard to find. That's where the dye is especially useful, as long as you can see where it's showing up.
Was this
answer
helpful?
Yes
No 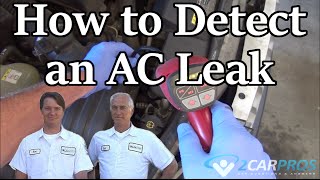 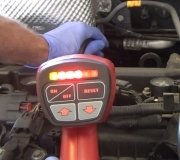 GUIDE
Air Conditioner Leak Detection
Got an air conditioner Freon leak? If you have too continuously recharging the system or if the system is flat you have a leak which needs to be detected. This guide will...

I Turn The Air Conditioner On It Blows Warm Air

When I Turn The Air Conditioner On It Blows Warm Air It Is Not Cooling Can We Fix It Please? It Is Super Hot Here.
Asked by Donna Mitchell2 ·
1 ANSWER
2012
DODGE RAM

Heat Blows On Passenger Side And Rear But Not Driver...

The A/c Gets Warm When Stopped At Lights

How to Find an Air Conditioner Leak Video 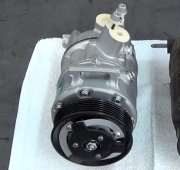