Converter take off an put a Flex pipe there?

ABBYPOLZIN
I have a 2001 chrysler sebring 2.7, can I take the converter off an put a lfex pipe there?
Do you
have the same problem?
Yes
No

ABBYPOLZIN
The car with start drive bout 200 feet then chug, if u give it gas it wont even move.
SPONSORED LINKS
Was this
answer
helpful?
Yes
No

CARADIODOC
Physically anything can be done, but you'll be opening a whole new can of worms, not to mention the legal ramifications. Your car has two oxygen sensors after the catalytic converters to monitor their efficiency. When no change takes place in the exhaust gas between the two sensors on each side the Engine Computer will turn on the Check Engine light and set related diagnostic fault codes. You don't want to be looking at that light forever.

In addition, when those codes are set there will be a number of other self-tests the computer won't run so other parts can become defective and you'll have no way of knowing which circuit to diagnose. Even if a problem does get detected and set an additional code, you'll never know because the Check Engine light will already be on.

I assume you suspect one of the converters is plugged. If that is really the case, what caused it? That does happen but it's not common. You aren't likely to get 200 feet if one really is plugged. I think you'd be better off getting it professionally diagnosed, then install a new converter if necessary. My guess is something much less expensive is causing the problem. Then what good will your flex pipe do you?

Flex tubing also doesn't last nearly as long as the stainless steel pipes the exhaust system is made of. You'll be patching the system every two years at an overall cost higher than putting on a converter once.
Was this
answer
helpful?
Yes
No

ABBYPOLZIN
Cant I take it in an get a fitted pipe put there? The flex pipe is just for a minute till I can ger it done the right way.
Was this
answer
helpful?
Yes
No

CARADIODOC
Absolutely positively no. No reputable shop is going to remove an emissions device under threat of federal and state lawsuit.

I'm not convinced you have a plugged converter. What are you going to do when the car runs the same way after you install a cobble-job yourself? At that point once a mechanic sees a converter missing they are going to put everything back together, set it outside, and tell you to come and get it. If you want to "get it done the right way", spend less money by paying to have it diagnosed properly, then decide how to proceed.
Was this
answer
helpful?
Yes
No

My Sebring Blows Out A Big Cloud Of White Smoke While Driving. It Happens When The Car Is Warmed Up And I Slow Down To Make A Turn And Speed...
Asked by pmf1410 ·
24 ANSWERS
5 IMAGES
2006
CHRYSLER SEBRING 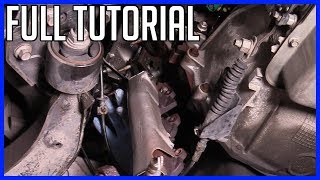