No heat from heater

WRENCHER1
Most of us fill by vacuum now and that eliminates all air in the system.
Was this
answer
helpful?
Yes
No

When I turn the heater/defroster on in the front of the cabin it only blows cold air. Also if I toggle the controls from either hot->cold or vise versa it will click repeatedly about every 2-3 seconds until I switch it back. The heat in the rear of the cabin works fine whether I use the rear control panel or the same control panel my front heater uses. Any ideas what this could be? I am trying to see if this is something I can fix myself or get an estimate to have it fixed so I know how much I will need to save. Thanks
SPONSORED LINKS
Was this
answer
helpful?
Yes
No

WRENCHER1
The temperature is controlled by the use of an air mix door that is operated by an electric motor/actuator. This door can be jammed or the actuator can be inoperative or have stripped plastic gears internally.
Was this
answer
helpful?
Yes
No

NUTTYCHEWZ
Hi, I have 2002 Ford Windstar. A while back the heat stopped working (both front and rear). I would get some heat when I gun the engine in the front but not the rear. So far I have replaced the front heater core, thermostat, intake gasket (had a leak), flushed/back flushed system with a cleaner and confirmed that the blowers work fine. When I switch heater temp it seems to switch fine between hot and cold. Maybe the blender door is stuck somewhat in the middle (doesnt seem that way) Water Pump seems fine too. I checked the inlet hose and it was hot but the outlet hose (by firewall) was cold. Strange no, being that its not the core as its new and not clogged. Any ideas?
Thank you.
Was this
answer
helpful?
Yes
No

HMAC300
On both the front and rear heat your blend door may not be opening causing this problem of no heat. However both of your hoses should be about the same temp in and out make sure teh vehicle is fully warmed up. I've enclosed a pic of the actuator on the front and it will look the same on back.
Image (Click to enlarge)

NUTTYCHEWZ
Thanks for the response hmac3000. 2 things - only the inlet hose was hot but not the outlet and when I was replacing the front heater core I saw the actuator/door motor and saw the gears (couldnt see the door) moving as I switched hot to cold and vice versa. It seemed to move freely back and forth.
Was this
answer
helpful?
Yes
No

HMAC300
Ok then there h as to be a water valve somplace thta allows the water to go through teh heater. Just follow the lines and it may be vacuum operated and not getting vacuum or the valve is bad. Our manual doesn't show that particular thing. I'd have to do more research to find it. Both hoses hsould be hot or close to temp on each of them.
Was this
answer
helpful?
Yes
No

HMAC300
A cople other things you might try is to back flush the heater core with hoses removed, and make sure you odn't have an airlock as well as the thermostate may not be operating correctly. There is a flow restirctor on the inlet hose and tahat may be damaged as well causing the problem.
Was this
answer
helpful?
Yes
No

NUTTYCHEWZ
Thanks i'll try your suggestions. One more thing the only time I got the heat to work pretty well in the front and even feel something in the rear heat was after I cleaned the system with a super cleaner for a few days. It only lasted a week or so but maybe that helps determine what could be the problem.
Was this
answer
helpful?
Yes
No

HMAC300
It may be clogged then the backflush should help
Was this
answer
helpful?
Yes
No

I have no heat, the blower blows, the anti freeze is full, the upper readiator hose is warm, heater hoses are warm, temp guage is at the normal temp range. The air isn't working, I pin hole leak that has yet to be found.
How can I fix this?
Was this
answer
helpful?
Yes
No

JDL
Welcome to the forum, thanks for the donation. I'd check the vacuum circuits. Any trouble codes? 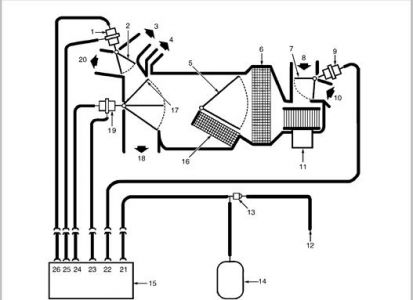 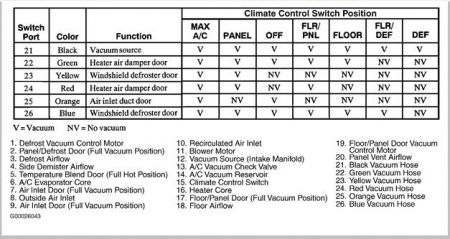 THE JUICER
This sounds like the same problem I just had and fixed myself for $72.00. $62 for actuator (Dealer) and $7 for stereo removal tool (AutoZone) + tax. Difficulty rating = easy/medium.

Turn on the van and the fan making sure the temp is set for hot and the van coolant is warm.

No heat from the front, turn on the rear fan and check for heat. I had heat coming out of the back.

Problem was the actuator (white plastic squarish-shaped piece approximately the size of a deck of cards). It is located directly behind the stereo.

Start by disconnecting the neg (-) battery cable (adjustable wrech). Using the stereo removal tools "poke" them into the two holes on each side of the stereo until you feel the clips inside "pop". There are four clips that hold the stereo in place, you need to release them and pull/wiggle/shimmy the stereo loose and forward. Remember the stereo has probably been in for 10 years. Once you feel it move forward even an 1/8 or 1/4 inch this means the clips are free. Now it was a test of my patience not to ruin the removal tools by bending them or grab the tape deck and pull because all I would do is break the plastic or cut my fingers. Take your time and wiggle while pulling forward. It will come.

The rest is easy. Using the socket set and extensions remove the three screws holding the acuator to the firewall and unplug the connector (wire) from the unit itself. Using a magnetic socket set is advised.

Take your new actuator out of the box and start working backwards. It took me approximately 2 hours, but I like to walk around, have a drink, it happened to be 60 degrees and sunny. A perfect project and it feels good to save hundreds of dollars compared to the dealer costs. As a bonus I found two CDs that we lost several years ago.

Good luck!
Was this
answer
helpful?
Yes
No
+1

the car heats up but there is no heat blowing in the front or back. There is no clicking sounds coming from the dash area. The temperature guage rises from cold to half way to hot normally. Doesn't seem like an acuator problem. Just not sure what it could be. Maybe the thermostat? When I switch from cold to hot there is a difference in blower force. It is slight but I can see there is a difference. Thanks for your help. Scott
Was this
answer
helpful?
Yes
No

JACOBANDNICKOLAS
With the engine running, warm, and the heater on, are both heater core hoses getting hot? Try replacing the thermostat and check the heater core if its clogged, also check the blend door might be stuck in the cold position and also the heater control valve
Was this
answer
helpful?
Yes
No

JOEUNGERICHT
Hello, when I have heat direction to the dash and feet, no heat is felt at the feet only dash. Same with defrost and feet no heat at my feet. I have checked thermostat and heater core, also I have checked for air in the system. On a separate issue I get no rear heat. Any ideas what the issue is.
Was this
answer
helpful?
Yes
No

KEN
Can you grasp the heater hoses to the core inlet and outlet to check if they are hot? Please get back to me.
Was this
answer
helpful?
Yes
No

JOEUNGERICHT
Hi Ken,
Yes, I can grasp the core's inlet and outlet. I have checked both hoses and they are hot. To be on the safe side, I have flushed the heater core already as well.
Was this
answer
helpful?
Yes
No

2CARPROS MIKE
It sounds like the blend system is stuck inside the heater box. The entire dash needs to be removed to access the heater box. It is a 8 hour job to remove the steering column and dash to gain access to the heater box, repair it and re-install.
Was this
answer
helpful?
Yes
No

JOEUNGERICHT
Thanks Mike, I had thought the same thing but wasn't certain. I took the dash partially apart. I wasn't sure where the heater box is exactly. When I had the dash partially apart, I could hear the blend door moving inside the heater box. But when I would direct the heat to my feet, it sounded like the electrical gears were struggling to finish closing or opening the door. In addition, it sounded like the heater box is in the center/passenger side of the dash. Again, I could hear it but could not identify were it was exactly.

Thanks - Joe
Was this
answer
helpful?
Yes
No

1999 Ford Windstar How Do You Remove The Heater Box

GUIDE
How to Fix a Heater
Step by step guide on how to fix your heater, this information pertains to most cars, trucks and SUV's.

Hi, Im Tring To Fix My Girlfriends 1999 Ford Windstar. She Has No Heat, Only The A/c Blows. Someone Was In There Before Me, Now I Have...
Asked by MarcBelmonte ·
5 ANSWERS
1 IMAGE
1999
FORD WINDSTAR

1998 Ford Windstar Rear Air Does Not Switch Between...

Heater Problem 2001 Ford Windstar The Air Conditioner Has Stopped Worked In Our 2001 Ford Winstar And Freon Was Just Put In A...
Asked by ruthy0374 ·
1 ANSWER
2001
FORD WINDSTAR
VIEW MORE 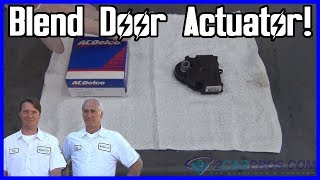 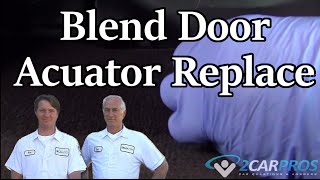