TKIRKP1016
I have a 2002 chevy silverado 6.6l 2500hd.
My name is Toby and when I apply presure to my brakes the truck slowes with a pulse almost as if the calapers are grabbing and letting go repeatedly as I come to a stop. I have replaced all the pads and inspected the calipers and they al looked fine. I had more wear on the driver side rear pads. What would cause the truck to pul back and forth when I am stopping.
SPONSORED LINKS
Do you
have the same problem?
Yes
No

DANLESABRE
Does your truck have ABS? If so is the ABS light on?
Was this
answer
helpful?
Yes
No
+3

TKIRKP1016
It has abs the light is not on and I don't really feel it in the pedal
SPONSORED LINKS
Was this
answer
helpful?
Yes
No

CARADIODOC
Warped brake rotors. Machining them is a normal part of any brake job. Simply slapping in new pads is not complete service.
Was this
answer
helpful?
Yes
No

TKIRKP1016
Replaced one of the rotors and had others inspected. They were not warped
Was this
answer
helpful?
Yes
No

There are two other things to look for. One is an egg-shaped rear drum. That will cause the symptoms you described and will be felt in the brake pedal and seat. That would not start right after doing the front brakes. Next, if you look at the hubs, you will most likely see some access holes between the holes for the wheel studs. Water can spray up in there and form round spots of rust on the backs of the rotors. The machinists will sand that rust off before they mount them on the lathe, but if they just measured them for thickness for you, they wouldn't have bothered with that. If you reinstall the rotor in a different orientation, that spot of rust will be wedged between it and the hub and prevent it from sitting squarely. Mostly you'll feel that in the seat but it will also cause the pedal to pulsate as the braking surface between the pads changes angles, and therefore thickness. In addition, the wheel won't mount flush so you'll have a slight shimmy in the steering wheel too. Scrape off those rust spots to prevent that.
SPONSORED LINKS
Was this
answer
helpful?
Yes
No

I Replaced The Right Side Rear Brake Pads And Rotor As They Were Grinding Steel On Steel While The Other Brakes Looked At Least Half The...
Asked by rivercruz ·
3 ANSWERS
1999
CHEVROLET SILVERADO 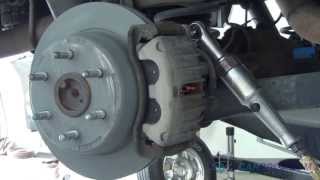 After Replacing My Rear Brake Pads, It Made A Bad Clucking And Vibration When Applying The Brakes. I've Changed The Rotors And Calipers And...
Asked by Larry LL ·
1 ANSWER
2000
CHEVROLET SILVERADO

I Had My Rear Brake Rotors And Pads Replaced At A Local Garage On My 2003 Chevy Silverado. About 200 Miles Later, This Evening, A...
Asked by mred2nice ·
2 ANSWERS
2003
CHEVROLET SILVERADO 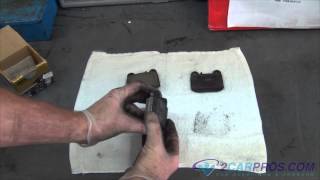 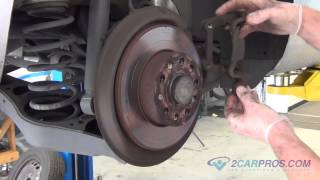 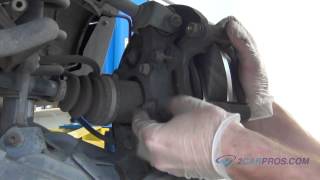