DANIELOROARK
The code that gets stored is multi cylinder missfire
Was this
answer
helpful?
Yes
No

Get a helper disconnect a sparkplug wire or 2 and ground it to the engine atleast 3/16 away from ground-have helper crank engine over-do you have a snapping blue spark? If so-you have a fuel related problem, Do you hear the fuel pump come On when you turn key on? If not check fuel pump fuse and fuel pump relay if okay-check the fuel pressure to rule out the fuel filter/fuel pump/pressure regulator and listen to the injector/s are they pulsing or hook up a noid light. No snapping blue spark continue to troubleshoot the ignition system-power input to the coil/coil packs,coil's resistances,cap and rotor,distributor pick-up coil, ignition control module, cam and crank sensors and computer Note: If it doesn't apply disregard it and keep testing
SPONSORED LINKS
Was this
answer
helpful?
Yes
No

ELLYGREEN
My car has been stalling in low speed AREAS NEVER on the express way. I have gutted the catalytic converter I was told that was the problem it was clogged bad but my car is still stalling now stalling more often. When it stalls my brake lock up and cant break I don't know what to do I have 3 kids that travel in this car and very little money I can not just hire a mechanic and I have to get to work please help
Was this
answer
helpful?
Yes
No

HMAC300
Scan for codes and check fuelpressure first. Auto parts scan for free
Was this
answer
helpful?
Yes
No

ELLYGREEN
I have now also changed the air filter the idle air control valve an have used sea foam to clean injectors the only other thing I know to try is spark plugs. Will a bad alternator cause is problem? I know the break are not locking up. An when it starts to stall I can sometimes give it gas and it will come out of it.
SPONSORED LINKS
Was this
answer
helpful?
Yes
No

HMAC300
Do what I said in first reply and also clean the throttle plate on both sides with choke cleaner.
Was this
answer
helpful?
Yes
No

STEVE L
I have a 1999 Bonneville that stalls at low speeds, around 35mph or less, always with my foot off the gas.I have replaced the throttle position sensor and the idle air control valve, and it still stalls. It will usually start again right away after stalling. Any help with this problem will be greatly appreciated.
Was this
answer
helpful?
Yes
No

MERLIN2021
If the SES light is not on, You may have a vacuum leak, get a can of spray gumout, spray the vac lines and maniflod area, when the idle changes, youve found the leak! You want the engine running and spray on the outside but do direct the stream onto the hoses, if it is a vacuum leak, the engine idle will change speed, then you have detected a leak, repair the vacuum leak and see how it runs! If SES is on, read the codes! Autozone does it free.
Was this
answer
helpful?
Yes
No

JAYARDITO
My 1999 Bonneville idles rough It seems alright when I first start the car and it is cold, but as soon as it warms up it idles rough. When the car is running and in park and the A/C running, if I turn the A/C off I can see the tach needle start to bounce up and down and then the car shuts off. While driving, if I come to a stop and the car is in drive I can see the tach needle bouncing up and down
Was this
answer
helpful?
Yes
No

2CEXPT
Hi JAYARDITO, Welcome to 2carpros and TY for the donation

Clean out the idle air control valve and the EGR and PCV valves and test the throttle position sensor and the manifold absolute pressure sensor.
Was this
answer
helpful?
Yes
No

TOMSIM
1997 pontiac bonneville; 150,000 miles - increasingly often, my car will randomly turn off while driving. It generally doesn't happen while I am pressing and accellerating. It's happened once coming to a short stop, a few times while idling at lights, and most commonly while driving at a steady pace, pressing the gas but not increasing speed.

When it shuts off (dies) I put it in neutral and restart it without any problem what so ever. If I press the gas immediately afterwards, it makes a sound similar to something in a metal can being shaken around.

The car doesn't have any major issues, except it needs a new serpentine belt. Could this be related to that?
Was this
answer
helpful?
Yes
No

KSCOTT84
SPONSORED LINKS
Was this
answer
helpful?
Yes
No

MARISA'SBONNEVILLE
I have a 1994 Bonneville SE and I have noticed that after I have been driving the car for a while and its good and warmed up, I start to lose my oil pressure, eventually when I come to a stop, ( especially if it is slightly abrupt) I lose all oil pressure and my car will die. I then turn everything off and it will start up again with no problems. But my oil pressure gauge stays on the low side. When I start my car and its cold, my oil pressure is fine. But declines over a small period of time. Any ideas?
Was this
answer
helpful?
Yes
No

NOOOGOOO
Jump starting it will start car, but dies when you put it into gear
Was this
answer
helpful?
Yes
No

Next, measure the battery voltage again with the engine running. It must be between 13.75 and 14.75 volts. If it is low, suspect the generator. It is real common on GM cars to go through four to six generators in its lifetime. To reduce the number of repeat failures, replace the perfectly good battery at the same time. As they age, they lose their ability to dampen and absorb the huge voltage spikes these generators produce due to their design.
Was this
answer
helpful?
Yes
No

MERLIN2021
https://www.2carpros.com/car_repair_video/test_fuel_injection_pressure.htm
Go here and checkout our video.
Also you might want to check for codes... 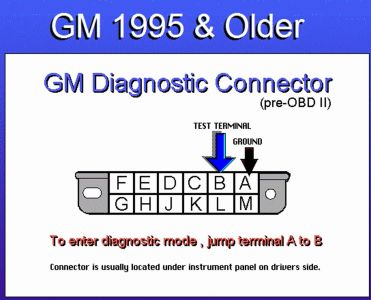 Cross these two terminals as shown, then turn the key on. Count the flashes, a 22 will flash as 2 flashes then a short pause, then 2 flashes, if more than one code is stored, the pause will be longer. The codes will display three times and end with 12. Write them down and post here. This connector is right under the middle of the dash...
Was this
answer
helpful?
Yes
No

MEMBER606
It starts ok, idles ok, then drive it for 10 mins it will start missing out then die.
Was this
answer
helpful?
Yes
No

JACOBANDNICKOLAS
It could be an ignition or fuel problem. Does the car start righ back up? If not, when it doesn't start, check to see if there is spark and fuel to the engine. Also, check fuel pump pressure.
Was this
answer
helpful?
Yes
No

MEMBER606
It doesnt start back up untill it's completely cooled down, I changed the spark plugs and the old one which are only a few months old had really bad carbon deposites, before I did it wouldnt start at all, Im thinking its bad gas bu Im not for sure, could it be he ignition coil packs? Or does it sound like bad gas?
Was this
answer
helpful?
Yes
No

This Is An Intermittent Problem. Car Runs Fine For A Day Or Two Then Stalls. Noticed Pwr Windows And Fuel Pump Don't Work When This Happens...
Asked by hilman ·
3 ANSWERS
1999
PONTIAC BONNEVILLE

Car Will Stall In Mid Driving Regardless Of Speed Or Position. She Used To Start Right Back After Placed In Park And Ignition Key Turn Off...
Asked by cockpit4hire ·
29 ANSWERS
4 IMAGES
1999
PONTIAC BONNEVILLE

I Need To Replace My Fuel Pump In My 1998 Pontiac Bonneville. I Was Just Wanting To Know Do I Have To Drop The Gas Tank And Get To The Feul...
Asked by ray8791 ·
30 ANSWERS
6 IMAGES
1998
PONTIAC BONNEVILLE

I Have A 2003 Pontiac Bonneville / 120,000 And I Need To Replace The Fuel Pump. Is There An Access Panel Under The Seat Or In The Trunk To...
Asked by Shanan Miller ·
11 ANSWERS
2 IMAGES
PONTIAC BONNEVILLE

I Drove Car This Morning To Work It Was Fine, Came Right Out 5 Min Later After Parking Tired To Start, Got Nothing, No Crank, No Engine...
Asked by leedogg ·
4 ANSWERS
2000
PONTIAC BONNEVILLE
VIEW MORE